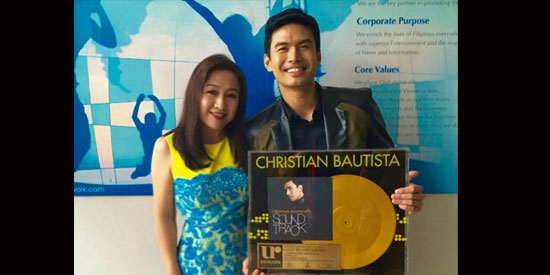 “I really didn’t expect that the album will be given the Gold Record Award. I am really pleased and surprised, and thankful,” says Christian.

In a post on Facebook, Christian said: “Thank you GMA, Universal Records, and STAGES, and our sponsors.”

Christian also thanked his fans, Christian Friends, for their support to the album.

Soundtrack, Christian’s first album in two years, includes memorable theme songs from the most romantic movies of all time.

The album’s first single "Up Where We Belong", the theme from the movie An Officer and a Gentleman, and was chosen by GMA as the theme of the Koreanovela Empress Ki.

Christian’s next single is his rendition of “A Thousand Years.”

The music video of the said single, which also stars Solenn Heussaff, will be released very soon.

Christian also tapped some of the best female singers to collaborate with him.

Former sweetheart Rachelle Ann Go joins him in their rendition of “The Way We Were.”

Perennial stage leading lady Karylle performs the romantic “After All” with Christian.

Julie Ann San Jose and Christian went “Cruisin’” in a new duet, while Nikki Gil lent her beautiful voice in the duet “Come What May.”