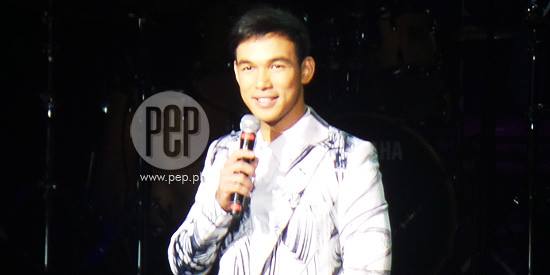 Mark Bautista narrated how he has evolved as a musician during his Here Sings Love concert at the Resorts World Manila last May 29.

In 2014, the Pinoy actor was tapped to portray the late President Ferdinand Marcos in the London run of the musical Here Lies Love.

He then told audiences that he got theater experience when he was in high school.

He made the transition from being a ticket seller to being a opening prayer singer to being a propsman to being an understudy until he was finally given his very first lead role on stage.

For years, Mark has been performing in concerts, variety shows, and he has already released six studio albums.

Mark played the role of Crisostomo Ibarra in this Ryan Cayabyab musical.

As an example, Mark sang Maestro's music, “Kahit Ika'y Panaginip Lang,” which was arranged for him by Basil Valdez.

THE FULL MONTY. After Noli, Mark was offered to do The Full Monty in 2013.

“Whatever happens inside the theater, stays in the theater. Walang pirated CDs na lalabas.

BEING IN LONDON'S WEST END. In a little over a year, Mark got another musical offer, this time for a play to be staged in the United Kingdom: Here Lies Love.

It's a revolutionary musical that traces the astonishing journey of First Lady Imelda Marcos, which was staged in London's West End.

Mark was surprised to see the foreign crew of the said musical when he auditioned. He realized it was a huge project so he really prepared for his audition.

Towards the end of his concert, Mark told the concertgoers about his London experience, “What a trip. What an experience.

SIDELIGHTS. During his Here Sings Love concert, Mark also had fun performing with one of his best friends in showbiz, Sarah Geronimo, with whom he sang “If I Was Your Man” by Bruno Mars.


Anne Curtis also tried to hit the high notes when she and Mark sang “Endless Love.”


Meanwhile, Jon Santos made everyone laugh with his stand up comedy act as Madam Imelda.

Before finally saying goodbye to his audience, Mark called on to Cris who introduced a guy from the audience.

Surprisingly, the guy stood up and told his girlfriend, “You know that I love you, right,” and popped the magic question, “Will you marry me?”

Of course, the girl said yes, and Mark Bautstista made the moment sweeter by singing Peabo Bryson's “Love Always Finds a Way.”