Nancy Castiglione reinvents self as a singer named Nancy Jane 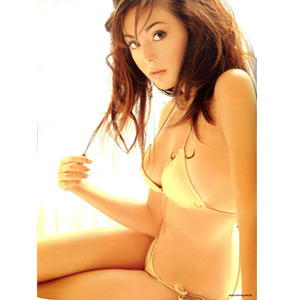 We came to know her from several years back as Nancy Castiglione, a cute, bright-eyed, Fil-Italian girl who simply wanted to be part of local show business.

Not many know that Nancy had formal training in both classical and theatrical music and was once part of a Philippine cultural dance group. During this stint, she learned how to perform folk dances such as the tinikling, pandanggo sa ilaw, wasiwas, among others.

She surprised the public with her recent makeover—that of singer and dance music diva. Born Nancy Jane Jimenez Castiglione, the actress turned recording artist chose to rename herself Nancy Jane.

Just recently, the sexy songster launched her 12-track debut album Nancy Jane under Warner Music at the Embassy bar at The Fort.

The album includes the carrier single "Love Song," which she performed with aplomb at the 2008 MYX Music Awards. Other club-inspired anthems include the riveting Rico Blanco penned "Control" to the thumpy "When You Play Around." A lounge type of song titled "Deep Inside You" is included, as well as the euro-pop flavored "Without You," and the dreamy "Moonlight Mood."

The singer admits that cutting an album was a long time dream of hers and that, all along, she was just waiting for the right timing.

"I know people would be quick to judge but I just hope they'd give it a chance. It's not as if I just did this on a whim. I worked hard on this and I am proud of how it turned out," said Nancy to PEP (Philippine Entertainment Portal) during the album launch.

As to why she decided her first musical effort to be of the techno-pop variety and not Filipino classical dance, which seems to be more of her background, the vocalist explained that she wants to be different.

"I wanted to do something new. Of course, I consider this opportunity very special, I don't want it to be something that sound like a million other albums out there. I want to be different."

Warner Music went all the way for Nancy's musical foray by hiring familiar musicians such as Rico Blanco of Rivermaya fame, DJ Brian Cua and Bimbo Yance of True faith to craft tunes for her. They even plan to release the album regionally.

According to Nancy, launching an album does not mean that she will turn her back on her acting career. "Of course not. I won't close my doors on that. I still feel I got a lot to achieve on that front."

As Nancy Jane the singer, she aims to fly higher.