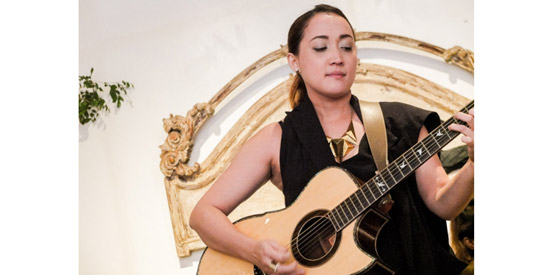 It was in 2007 when Julianne, who was only 24 years old then, launched her debut album titled Grateful (released by MCA Universal) that won her two Awit Awards in 2008: Best New Female Artist and Best Female Recording Artist.
In 2013, Julianne joined PhilPop and performed "Pansamantagal" with Sitti and made it to the Top 3 of the contest. In 2014, the same song won Best World Music at the Awit Awards.
Now at 32, Julianne is all-woman and the new songs in her album tells her long journey of maturity and self-discovery.
“It took me this long to come up with a follow-up album. We wanted an album that would really inspire a lot of people—especially women who are now raising themselves up in the world.
“The songs here are stories of my long journey into who I am today.
“I discovered so many things about me and about other people.
“And I want many people to discover my music that symbolizes the inner beauty in all of us,” says Julianne.
During her journey of self-discovery, Julianne did a lot of travelling and eventually found the man who truly makes her complete.
“We recently celebrated the first year of our relationship.
“I must say that this relationship gave me that much needed inspiration to finish Ashes To Beauty album.
“This time around, we are the ones producing it and we will be selling it in venues where we will have big events.
“I am surprised by the request of so many people to come up with a new album. These are the same people who supported my first album and they are still around.

“It makes me happy to perform again and to share my music.”
Ashes To Beauty has 10 original songs composed by Julianne herself. Included here are the songs Fly, Ikaw Lang, 7000 Miles To Grow, Warning Sign, One Step, Never Far, Melancholy Moon, Here and Now, Buwan and the title track Ashes To Beauty.
Two music videos are can be viewed on Julianne’s official YouTube channel: Fly and Ikaw Lang.
Julianne describes her new album as “an inspiration and it will encourage women of all ages, from all walks of life through songs that communicate my real-life testimony that beauty can be found in the most unexpected places.
“Every woman could find beauty even in ashes. Women are blessed to transform something like ashes into something so beautiful that they can be proud of and draw strength from.”
Julianne is also a supporter of the Plump Pinay, an advocacy that supports plus-size Filipinas, as well as Who Am I, a community building group for women who wants to know where they stand in this world.
During the album launch, Julianne was supported by Gary Valenciano and Angeli Pangilinan-Valenciano, former Jam 88.3 DJ Patricia Malay, Barbie Almalbis, Acel van Ommen, Monique Lualhati, Katrina Velarde, RJ dela Fuente and Maya’s Cradle.