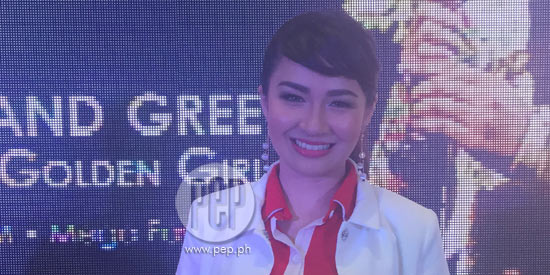 Gerphil Flores revealed that there are plans for her to collaborate with renowned Canadian musician and producer David Foster.

What’s next for Gerphil Flores after her stint in Asia’s Got Talent?

It seems she is on her way to penetrating the international music scene through the help of David Foster who promised her “the world will know you.”

PEP.ph (Philippine Entertainment Portal) had a quick chat with the 24-year-old classical singer after her successful mall show at the SM Megamall Fashion Hall last Sunday.

Gerphil revealed that there are plans for her to work with Foster, who mentored Charice and worked closely with her regarding her international career.

When asked if she has been communicating with the Grammy-winning musician and producer, she answered:

“And we are going to have a collaboration soon, kaya ayun abangan nila yun. Coming soon.”

When Gerphil performed “The Impossible Dream” during the grand finals of Asia’s Got Talent, David told the Pinay singer: “I promise you, I promise you, the world is gonna know about you. That’s a promise.”

(Read: Gerphil Flores THEN AND NOW: missed out on Pilipinas Got Talent to Golden Girl in Asia's Got Talent)

ON CHOOSING A TV NETWORK. When asked to choose among the local TV networks, Gerphil clarified that she is not yet at liberty to decide.

Even though she finished third in Asia’s Got Talent, things are looking up for Gerphil who was first introduced to the Filipino viewing public as Fame Flores. She became a semifinalist in Pilipinas Got Talent in 2010 but she was unable to make the cut.

Gerphil’s success in AGT had some of her fans commenting on how PGT judges, particularly Kris Aquino and Ai-Ai delas Alas, had been mistaken in criticizing her song choice on the local talent show.

But the 24-year-old performer stressed that she has no ill will towards Kris and Ai-Ai.

“And they were judges then and they have the right to give out their own comments nung time na yun.

At that time, Gerphil performed a poignant rendition of Sandi Patty’s “Via Dolorosa.”

A student of the University of the Philippines College of Music, she preferred classic songs to go with her operatic voice.

Despite the discouragement, Gerphil decided to stick to her signature style.

She explains, “Kasi it’s through this genre of music na talagang I feel myself.

“I feel like I can fully express myself whenever I sing classical or crossover songs. Feeling ko talagang mapaninidigan ko ‘pag kumanta ako ng ganung genre.

Now on her fifth year taking up Bachelor of Music, Major in Voice, Gerphil is expecting to graduate from UP this December.

GERPHIL THE THESPIAN. Even before heading off to college to study music, Gerphil had already been active in the local theater scene.

“And then sa Repertory [Philippines], I was one of the Von Trapp children sa Sound of Music.”

If she ever had the chance to perform on Broadway, what would her dream role be?

For now, Gerphil is still waiting for the right opportunity to take the next step in conquering the world stage.