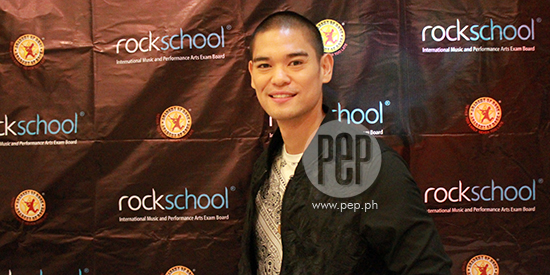 Jay-R's song "Parachute" is now part of the syllabus of international Rock School.

Jay-R is named as the second Filipino Academy of Rock amabassador next to pop rock princess Yeng Constantino.

The King of R&B is now an honorary diploma recipient of Academy of Rock's Rock School.

PLANS TO GO BACK TO SCHOOL. Rock School caters to people who want to take an intensive music class that guarantees a certificate that is recognized worldwide.

Last Sunday, June 28, Jay-R attended the graduation ceremony held at the Academy of Rock in Singapore.

Now that he was tapped as the new ambassador, what is his involvement in Rock School?

“It’s our job to really spread the word about Rock School, about Academy of Rock,” says Jay-R.

He continued, “So what they did was they made us honorary graduate they gave me a diploma for vocals so...I’m able to bring this anywhere in the world for any organization for work, mga ganon for colleges, or anything, so I get to present that and they get to see, aside from my platinum records and my career in the Philippines, I also have a certificate diploma saying that I have one in vocals.

Jay-R said that his experience and knowledge of music exempts him from taking the exams.

He explained, “Well, we’re exempted for our experience and for our knowledge of music. So we’re exempted to take the tests and exams. That’s why they called us the ambassadors and honorary graduates.

Was he tempted to take it?

Does he think being an honorary graduate of Rock School can also be helpful for his own music label?

"Most definitely, see what it is, it legitimatizes… It becomes legitimate! When you have this piece of paper ‘di ba? So me, having my own record label, having a diploma as well, you know, people take me seriously because you know what you’re talking about ‘di ba?”

Jay-R has been in the business for more than ten years now and despite his achievements, he still believes that proper education in music is a necessity.

He explains, “Yes, I recommend mag-aral kasi, you know a lot of the times when it comes to music, na-[aaral] 'yan—for the people that love it but aren’t born with it, you’re able to learn it and that’s what’s good about Academy of Rock’s Rock School because you can learn it.

How does Jay-R stay relevant in the music industry?

“And since I’m a singer, I’m a performer, I think music is the best way to stay relevant.

“You know, being on the radio, having music videos all the time on the video channels. So you know, it’s really hard to get on TV when it comes to like being artista, being a singer on a variety show, it’s very hard to penetrate, but the way to do it is to stay relevant.

“When people see that, you stay relevant because you’re within their mind. Di ba out of sight, out of mind but ‘pag nakikita ka, relevant ka.

How did his stint in ABS-CBN's franchise game show Your Face Sounds Familiar help boost his career?

“So because it is number one, millions and millions of people are watching it and they get to see me on the show so sa akin parang yung brand ko as Jay-R.”

“You know, it’s been great because like I said yung schedule, it’s been very hectic and we don’t really see too much of each other anymore.

“She understands na hindi kami magkikita, mga ganon, so it’s really nice to see how strong of a woman she is when it comes to times like this.”

Mica is one of the talents under Jay-R’s music label Homeworkz. They are currently working on her music album that will be launched within the year.

Jay-R said that Mica’s all-original album features music that is similar to Rihanna.

“We’re just finishing mixing lang and it’s under my label as well.