Zsa Zsa Padilla chooses singing over teleserye; recalls: “It was a very highly emotional time for me when Dolphy was ill." 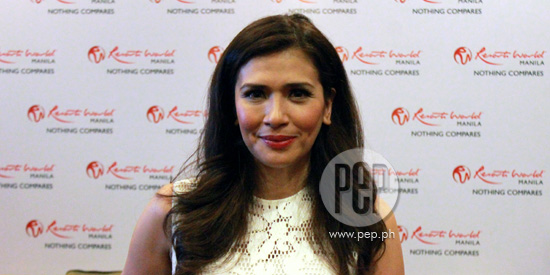 Zsa Zsa Padilla says the title of her album Beginnings suits her life right now since she is beginning a new chapter in her life. Does this mean that her former flame, Comedy King Dolphy, is no longer part of this new chapter? She answers, "No. Never."

It was also the title of the Valentine concert she held just last February.

She said that her album, which was inspired by the movie Begin Again, suits her life right now, especially since she is beginning a new chapter in her life.

“I was absent kasi in the concert scene for like four or five years.

“I’m beginning a new chapter in my life, of course, everybody knows I’m a lot happier now.

But does this mean that her former flame, Comedy King Dolphy, is no longer part of her new chapter?

“Oh no, never. Whatever happened in your life, even in my Instagram, I try not to delete people because you’re no longer my friends, we’re not close anymore, stuff like that.

“I think it’s just Beginnings because this is a beginning of a new chapter. And I’ve explained that in my album.”

The songs in her album are actually a mix of revivals from the hit songs of the '70s and '80s. The carrier single is her version of the '70s pop ballad “Just A Love Song”, which was first performed by Walter Murphy.

CHOOSING THE SONGS. Zsa Zsa, or Zsa Zsing to her fans, shared that she personally chose the songs included in the 10-track album.

“I picked the songs, of course, with Polyeast and my manager, so this is the most intimate.

“So what I did was I really went close to the microphone.

She added that some of the songs were also chosen by her manager, “She would want me to do 'Alone Again Naturally,' ang lungkot naman.

“But you know it turned out to be one of the best songs also because we were choosing…it’s so hard.

“And since there are a lot of revivals, oh what has not been revived yet, I think 'Just A Love Song' is one of the few songs I’m lucky enough because it has been forgotten to be revived.

“Parang it’s so beautiful, parang walang nagrevive, thank God that I could revive it.”

She also recalled how she recorded her carrier single.

“When I did that song, because I’m an actress too, somehow how would I sing this song… Actually all the songs I tried to… I wouldn’t sing it the way I would in a show.

“But this one I felt is the most personal that I wanted to be just whispering to a person in his ear, that’s how I did the song.”

The Divine Diva also shared that she is already preparing for the follow-up of her album.

“I hope so. Actually, I’m picking songs already for Beginnings 2.

Aside from "Just A Love Song” and “Alone Again Naturally”, her 10-track Beginnings album also includes laidback revivals of “How Deep Is Your Love?”, “One Hello” and “I Love You More Today Than Yesterday.”

BACK TO THE CONCERT SCENE. After the success of her Valentine concert, Zsa Zsa is ready to go back to the concert scene as her Beginnings concert will have a repeat on July 31, 2015.

“This is a repeat of the concert I had last February.

“But the theme is also the same, ang mga kanta dito, luma. It caters to my audience.

“These are people who grew up listening to my songs in the '80s, so the moms and the dads out there.”

The concert promises to highlight Zsa Zsa’s 32nd year in the entertainment industry.

Some of the songs that she will be performing are her classics “Hiram”, “Ikaw Lamang” and “Kahit Na.” She will also perform a medley of her covers and songs from the '70s.

According to her, this concert also signifies a new beginning in her life, as she is ready to come back to concerts fulltime after Dolphy’s death.

In previous concerts, she would always get emotional.

“Yes I’ve always cried. Actually, the one that you’ll see now, I was on stage from six years ago, that was the last time before I had the courage to sing on stage.

“Everytime I would sing, people, they say when you’re happy you’ll just listen to the melody.

“But when you’re really sad, you concentrate more on what the song is saying, the lyrics.

“And each time, it’s hard it’s difficult, most especially when you’re going through something very, very painful.”

The Divine Diva says she is now able to overcome these intense emotions.

“Yes, but sometimes it takes me back, like during my concert when I sang 'Hiram,' there are times that I could just you know, sing.

“But I normally don’t sing it, even if it’s the most requested song, talagang I would do it sa last para in case I get emotional, I’m so much attached to that song about my past, you know kay Dolphy, about how our life is so complicated in the beginning.”

She also said that they also concentrated with the arrangement of the songs to give an all-out concert for the audience.

“With this concert we have an 8-piece band, we really concentrated on the arrangement.

“We wanted to make sure that people would come, one who understand my music, talagang mape-please sila sa maririnig nila, o talagang sulit yung bayad.

For her concert, Zsa Zsa will be joined by her daughter Karylle and Concert King Martin Nievera. Homer Flores will serve as musical director.

ZSA ZSA AS TELESERYE ACTRESS. Because of her emotional state while grieving over loss, Zsa Zsa veered away from the concert and recording scene. She then decided to concentrate in a field where she can use most of her emotions: teleseryes.

She was last seen in the 2014 remake of Dyesebel starring Anne Curtis where she played a kontrabida.

“It was a very highly emotional time for me kasi when Dolphy was ill.

“You know how songs work, di ba? Songs work in a way [where] you’ll remember the exact time and place you were, when you hear it.

“So para sa akin, ‘pag kumakanta ako, ang hirap kasi when you cry, you can choke up, and it’s so hard to do the same thing.

According to Zsa Zsa, she is being offered a new teleserye to be shot in San Francisco. But she explained that she wants to focus on her singing career at this time.

“I’m concentrating on my singing kasi I haven’t done this in a long while.

“It’s so hard to go back to concerts kasi siyempre, I’m trying to get back, to regain my audience, di ba?

“You really have to work on it. It’s not something na, ‘O andyan na naman sila.’ Hindi ba?

“Because of course, there’s a new crop of singers, and then lahat naman ng ibang singers nandiyan pa rin, so you really have to conceptualize it well."