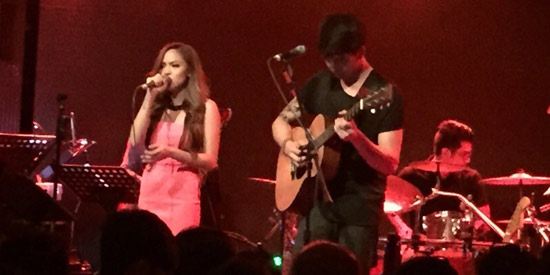 In their back-to-back concert dubbed Migz.Maya.Merged held last July 16 at 19 East Bar and Grill, Migz Haleco and Maya entertained the crowd with their stage antics. Migz showcased his guitar playing while Maya treated fans to her soulful voice.

Two of PPL Entertainment Inc. newest artists, Migz Haleco and Maya, had their first show at 19 East last July 16 and both were very well-received by the audience.

It was quite a revelation for Migz who entertained the crowd with his guitar-playing skills.

Migz started playing guitar at the age of 14. In 2006, he tried to compete in Talentadong Pinoy and it was only after joining the contest when he started to hone his singing talent.

The 21-year-old Caviteno has done campus shows and concerts and is also pretty well-known especially in different social media sites such as YouTube and Soundcloud.

His original composition, “Losing It,” was one of the highlights of Migz's performance in the concert. He also sang his own version of Yeng Constantino's “Ikaw."

Not to be outdone, Maya sang an original song from their group, Blush, titled, “Every Woman.” Her performance of Beyonce’s “XO” and “Halo” really brought the house down.

Maya is part of the Pan-Asian vocal group, Blush, which consists of members from China, India, Japan, Korea and the Philippines. She has performed with Justin Bieber, Black Eyed Peas, Jessie J, Diana Ross, Janoskians, and The Wanted in different concerts abroad.

While Blush is on their season-break, Maya tries out the Philippine entertainment industry by sharing her music and her moves.

Are they the newest “duo” in the music scene?

Maya and Migz are two individual artists that their PPL Management thought of collaborating for the Migz.Maya.Merged show.

They had two special guests that night: Gloc-9 and Jay Durias.