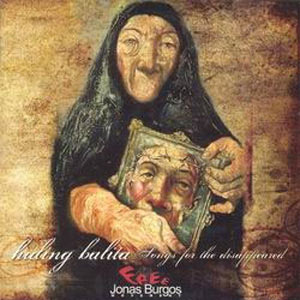 Huling Balita: Songs for the Disappeared was launched at the Newsdesk Café in Quezon City last April 27. The 10-track album has songs by Jess Santiago, Noel Cabangon, Radioactive Sago Project, and Cooky Chua.

The continuing battle of the friends and families of the disappeared against extrajudicial killings and abductions is put to music in Huling Balita: Songs for the Disappeared. This 10-track album is produced by the support group, Free Jonas Burgos Movement.

This CD was recorded live during the concert of the same title held at the University of the Philippines-Diliman last December 11 as part of the Human Rights week. The compositions of Huling Balita represent a variety of genres—punk, hip-hop, folk, rock, lullaby, and love songs.

It also includes a track titled "Freestyle for the Desaparecidos," performed by the Tribu Poets.

Huling Balita is "a testimony of generous hearts helping victims of disappearances," says Edith Burgos, mother of land-rights activist Jonas Burgos who was reportedly abducted in April last year by unidentified suspects. Jonas is the son of the late journalist Joe Burgos, the publisher of Malaya, Ang Tinig ng Masa and We Forum.

In an introductory message featured in the album, Edith describes the compositions as "the musicians' response to the family's plea for help in our search for Jonas."

She explains that the variety of songs showcased in the album mimics the hard realities of life. "This is what real life is all about," the mother of five narrates. "There is no one particular beat, no one particular pace. Each victim, each member of the family must cope in his own way, in his own circumstance," continues Edith. "What binds us all is that common thread—our solidarity with the victims and their families."

Jonas Burgos' disappearance marked its first anniversary last April 28. His abduction is just one of the many documented cases of desaparecidos in the Philippines.