Meet the sexy Coverboys during their May 9-10 concert 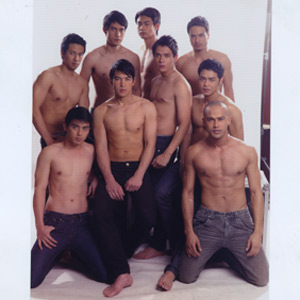 The Coverboys is composed of (back row, standing) John James Uy, Victor Basa, Ron Morales, and Rafael Rosell. Other members are (second row) Marvin Raymundo, Jon Avila, Jake Cuenca, Zanjoe Marudo, and Will Devaughn. They will stage their first concert titled Coverboys Uncovered on May 9-10 at the Music Museum.

Expect sexy production numbers to be prepared by the nine members of the Coverboys for their first concert titled Coverboys Uncovered. TV idols Jake Cuenca and Rafael Rosell; Star Magic talent Marvin Raymundo; Pinoy Big Brother housemates Zanjoe Marudo, Victor Basa, Jon Avila, and Will Devaughn; and Be Bench models John James Uy and Ron Morales promise to make their fans scream with delight during the event to be held on May 9-10 at the Music Museum.

During the Coverboys Uncovered press conference at Jozu Japanese Bar and Grill in Quezon City last April 30, PEP (Philippine Entertainment Portal) asked the organizers what makes this concert different from the production numbers of the Coverboys during ASAP.

"It's more revealing. You will see the hidden talents of the Coverboys. And, of course, they will tease the audience," says Ronald Padriga, synergy specialist.

Coverboys Uncovered will showcase the playful, naughty, and steamy side of the all-male group. Special guests Vice Ganda, Ethel Booba, John "Sweet" Lapus, and Nikki Gil will make the concert even more enjoyable. This concert features the choreography and direction of Georcelle Dapat of the G-Force and is produced by ASAP Live and MJM Productions.

How long have they been rehearsing for this concert? Jon Avila says, "I've been in the Coverboys for one year now so I guess that one year has been practice for me. It will be worth your money."

According to Rafael Rosell, the Coverboys have developed a strong bond because of their weekly stint in ABS-CBN's Sunday variety show ASAP. "Kapag pumunta kayo sa dressing room namin ‘pag Sunday, it's like we're in a bar talking. Kulang na lang ang beer at billiards table. Sumasayaw kami dun, we try to memorize the lyrics of our songs."

For Star Magic Batch 15 member Marvin Raymundo, he felt a bit uncomfortable while shooting the video directed by Jojo Saguin. Marvin explains that the concept of the video is to have the Coverboys portray various fantasies of women. In his case, he is cast as a techie guy who chats with women on the Internet. Other members of the Coverboys will play a gardener, a construction worker, a hip-hop dancer, and a lifeguard.

Marvin says that he often encounters people saying negative things about the group but he takes the criticisms as a challenge. "Yung iba sinasabi, bakit kami nagkaroon ng concert, but you just have to prove them wrong, so we're really preparing for this concert." The 20-year old model-actor has appeared in the ABS-CBN shows Pedro Penduko, Super Inggo 1.5 and Lastikman.

The Coverboys were then asked if they have a special guest who will watch the concert. Zanjoe says Mariel Rodriguez will be in Hawaii, Rafael says his girlfriend Malaya Lewandowski is in Abu Dhabi, while Will Devaughn is unsure whether or not Riza Santos will watch the sexy concert. As for Jon, he says that his mother will be arriving in the Philippines on May 7, just in time for the opening night on May 9.

For inquiries about the concert Coverboys Uncovered scheduled on May 9-10 at the Music Museum, please call Ticketworld at 891-9999.