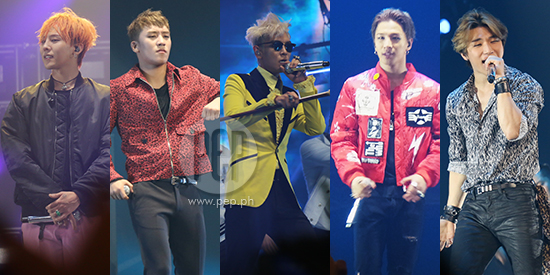 Thousands of Filipino fans (who call themselves VIPs) gathered at the SM Mall of Asia Arena on Thursday night, July 30, and waved their light sticks tirelessly as they witnessed the band’s comeback to the Philippine concert scene.

One of the celebrities who watched the concert was 2NE1 member Sandara Park, who is a YG Entertainment artist just like Big Bang.

Organized by Pulp Live Productions and co-presented by Globe Telecom, this concert marks the second time that Big Bang performed in Manila. Their first visit to the country was held in 2012 for the Alive Concert Tour.

The quintet kicked off their concert party with “Bang Bang Bang,” one of the latest tracks from their third studio album MADE. This was followed by their songs “Tonight” and “Stupid Liar.” Other songs in the lineup included “Bad Boy,” “Cafe,” and “Lies.”

As expected from K-pop concerts, fans were left in awe by the lights play, gigantic LED walls, and fireworks display.

Fans located at the VIP section were also amazed by the see-through stage set-up that moves from one side and can be placed in the middle of the Arena.

Taeyeang addressed their Pinoy fans, "Did you guys miss me? Because I missed you guys a lot."

Taeyang continued, "I love you from the bottom of my heart."

He continued, "I can't see you right now so I need to hear you!”

The band also performed an acoustic rendition of the 2008 hit song “Haru Haru” from their second Korean album titled Remember.

Big Bang continued the party with “How Gee” and “Feeling” and ended the first half of the concert with “Loser” and “Blue.”

The second part of the concert focused on solo and collaboration performances. The band’s youngest member Seungri was up first and performed his solo track “Strong Baby” followed by “Let’s Talk About Love” with G-Dragon.

Towards the end of their concert, Seungri told audiences that he loves the Philippines so much that he doesn’t want to go back to South Korea.

Taeyang then quipped, “We’ll leave Seungri here as a gift!”

Seungri also surprised everyone when he asked the crowd, "Do you want to see my Pabebe?"

The singer then did his version of "pabebe" which is the Gwiyomi song.

The South Korean singers ended their concert with “Bae Bae” and “Fantastic Baby.”

For their encore performances, Big Bang rocked the stage once again with “We Like 2 Party,” “Hands Up,” and “Bang Bang Bang” before finally saying farewell to their Filipino fans.