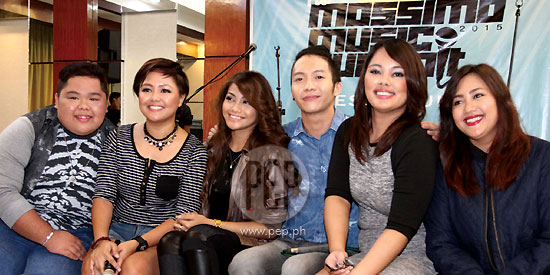 Four acts are competing in the 2015 Mossimo Music Summit: (L-R) Mark Francis Reyes, Zsaris Mendioro, Kristel Herrera, as well as the trio OTM (composed of Matthew, Kaye, and Jenz). The winner will receive half a million pesos worth of cash and prizes, an exclusive recording contract, and a chance to join the local music industry.

Four acts are all set to sing their way to the top, but only one of them will emerge as the winner in the grand finals of the 2015 Mossimo Music Summit.

After a month of strict auditions and screenings, Kristel Herrera, Mark Francis Reyes, Zsaris Mendioro, as well as the trio OTM have been chosen to battle it out and get the chance to win P500,000 in cash and prizes, an exclusive recording and management contract with Curve Entertainment, and a chance to join the local music industry.

Kristel, 22, a lounge singer, has been singing since she was 9 years old and is thankful that the competition has given her an “opportunity to share [her] talents.”

The lass from Sampaloc, Manila said that she joined Little Big Star in 2005 and Charice Pempengco was her batchmate. Kristel said that she got as far as the wild card competition.

Zsaris, on the other hand, is a loop artist, which refers to a performer who makes music with the use of wide range of music technologies.

This singer, who hails from Laguna, said during the August 13 press conference that she is thankful to Mossimo for spearheading this contest for aspiring entertainers like her to showcase their talents.

“I’ve trying to play more than half of my life. This is my first competition. Not everyone aware sa ginagawa ko,” Zsaris said, referring to her being a loop artist.

Matthew narrated that the group started when they sang at the wedding of Kaye, the sister of one of the members.