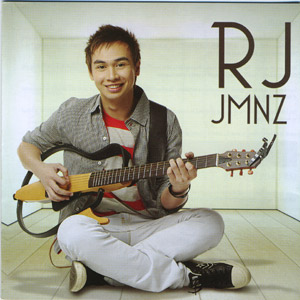 Pinoy Dream Academy scholar RJ Jimenez realizes his dream of launching his own solo album titled RJ Jmnz under Star Records. Get a chance to win an autographed copy of RJ Jmnz by joining PEP's online promo. See details below.

Ryan Jay "RJ" Jimenez temporarily put aside a career in the field of Electrical and Communications Engineering to concentrate on the local recording scene. The Pinoy Dream Academy scholar has released his 13-track album RJ Jmnz, which is now being distributed by Star Records.

Known for his breakthrough hit single "Miss Kita Pag Tuesday," this 24-four-year old singer-songwriter unleashes his musical prowess once more in this 13-track CD filled with chill-out songs suited for people in all walks of life.

"May mga songs na masaya malungkot, ma-emote, whimsical, malaro at kung ano-ano pa. I want to touch as many audiences as possible by giving them songs they can relate to."

Featured in the album are songs such as "Sa Wakas" and "It's All About Your Love," songs described by RJ as simple yet have strong meanings.

Get the chance to meet RJ Jimenez when he goes on a mall tour at SM Southmall on May 25, SM Taytay on June 1, and SM Lipa on June 8.

ONLINE PROMO. To win one (1) autographed album of RJ Jmnz, leave a comment answering our question below.

What is the name of the reality show that honed the songwriting skills of RJ Jimenez?

PEPsters who will answer the question in the comments section will have a chance to win an autographed copy of the album RJ Jmnz. The electronic raffle will take place on May 20 (Tuesday).

The five lucky winners will be notified when they can pick up the autographed album at the Summitmedia office at Robinsons Galleria, Ortigas Center, E. de los Santos Ave., Quezon City.

This promo is now closed. Thank you to everyone who participated.