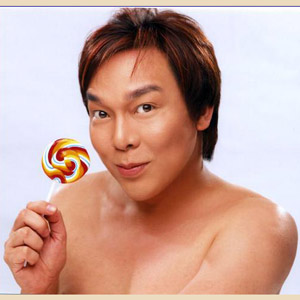 John "Sweet" Lapus looks back on his 15 years in showbiz with a one-night event titled JOHN LAPUS IS SWEETiLiCiOUS: The Universal Sweet Anniversary Show. This will be held at the Music Museum on May 31 (Saturday).

PEP blogger John "Sweet" Lapus will be celebrating his fifteenth year in showbiz with a show at the Music Museum on May 31 (Saturday).

Watch Sweet perform with his close celebrity friends for this concert titled JOHN LAPUS IS SWEETiLiCiOUS: The Universal Sweet Anniversary Show. For the pictorial of his show with Sara Black, John was able to effectively convey the 15 emotions that he has experienced during his showbiz career. These include: happy, sad, angry, warla, dedma, chika, krung-krung, bornot, bokot, maldita, bonggang-bongga, praning, jelly, okray, and sweetilicious.

To view the 15 faces of Sweet (also called sweeticons), click HERE to visit this blog entry.

The TV host-comedian is known for hosting the segment "Don't Lie To Me" on GMA-7's Showbiz Central. Guests are attached to a lie detector machine and whenever the artist is found to be lying, Sweet performs an energetic dance number to the tune of Gloc-9's "Shake It, Sweet."

This is how John describes sweetilicous in his blog Korek Ka John: "Yung sa sobrang tamis, sumarap. Nagustuhan niyo ang timpla and you just can't help but to have some more."

With all the talent and comic antics shown by Sweet through the years, you really can't help but have more of this bubbly host. Don't miss Sweet's 15th anniversary offering as he looks back on his career starting with his stint as a researcher for ABS-CBN's defunct talk show Showbiz Lingo until he became the well-known TV host-comedian that he is today.