Nicholas Petricca of American band Walk the Moon reveals, “My ex-girlfriend was Filipino." 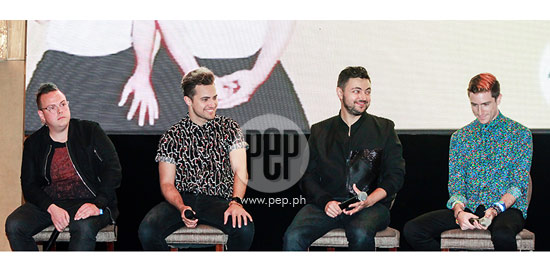 Walk the Moon, the American indie band behind the song "Shut up and Dance," recently performed in the Philippines. The band is composed of (L-R) Sean Waugaman, Kevin Ray, Eli Maiman, and Nicholas Petricca.

“It’s an amazing feeling, it’s been an incredible journey,” said Nicholas with a smile.

“'Shut up and Dance' [the band's biggest hit so far], now taking us all over the world. It’s an amazing feeling that no matter where we go, people are just waiting to dance, and that’s what we are all about.”

Bassist Kevin Ray recalled how they shot the music video for the song "Shut up and Dance": “My favorite part was the improvised part of our good friend, Eli. We were filming a tender kiss moment between Nick and the girl. Eli, out of nowhere, post-Nick kiss, decided to hit me and kiss me.

“At the moment, it was great. We all laughed, it was hilarious. But when we got up, the director said, “That’s great! Let’s do it again!”

Guitarist Eli Maiman added: “That’s a good one. But my favorite wasn’t in the music video. They put Kevin and I in green screen suits that were skintight, green suits with hoods, which showed everything. All of these pretty girls were around. We felt like a dog that got shaved or something. And then we ended up not using it, you know?

“The shot was there, but you can’t see us at all. But there were photos—they’re in my private collection.”

ON SONGWRITING. Lead vocalist Nicholas Petricca describes how they write their songs: “We [did] most of our writing in this house in Kentucky. But after that point, our team asked us to write a little bit more and I’m really glad they did ‘cause in those extra writing sessions we had in L.A., that’s where we wrote 'Shut Up and Dance.'

“That’s when we were out in a club. There was this girl there in a backless dress and beat-up red sneakers and she actually told me to shut up and dance with her. It was based on a true story. What would’ve happened if we weren’t in California?”

When asked about his favorite lyrics in their album, Nicholas paused before citing lyrics from the song "Portugal": “Take me with you / Because even on your own / You’re not alone.” He admitted that the song reminds him of how much he misses the people he loves.

In producing music, the lead vocalist of Walk the Moon believes, “I think, making the best record is finding the balance in between doing something completely spontaneous, and digging and honing until you find the right moment that you’ve crafted something.”

They first revealed how drummer Sean Waugaman got his nickname “The Octopus.”

“Sean does some incredible things during the show. You come to the show, watch Sean closely, and see him do a million things. We call him the octopus, because it seems like he has eight arms.”

For members of Walk The Moon, they consider their music as “a little sweet treat, but like, at the end of the day, it’s good for you.”