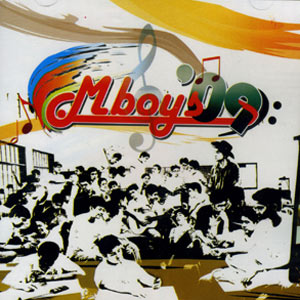 The 41 students of section M of the Ateneo High School are now recording artists, courtesy of their 5-track EP Mboys '09. It is being distributed nationwide by Sony BMG Music Entertainment.

Junior high school students nowadays are expected by their parents to pass their chemistry class, think about their future courses in college and perhaps excel in their subjects.

But the third year students of section M of the Ateneo High School surprised their parents when they were given the chance to become recording artists even at a young age. During the year-end gathering of section M, they performed songs for their parents—one of whom happened to be a well-known music executive who goes by the name "Mr. C."

Maestro Ryan Cayabyab attended the year-end gathering for his son Antonio Maria (also known as Toma) who is part of section M. When he heard the class perform during the said fund-raising activity, the Maestro knew that he could hone their singing skills just as he has honed other groups, like Smokey Mountain and the RCS Singers.

"When Ryan heard them sing, he said, ‘Let's put it on a national level,'" recalled Emmie Cayabyab, who now acts as the group's manager.

With Mr. C's ear for music and instinct to spot future stars, he does not want to just let these talents pass. So he came up with an idea of co-producing an EP featuring the boys' compositions.

This is the origin of "Mboys '09," the collective name of the 41 boys from section M, who will receive their high school diplomas in 2009. Each has his own contribution which, according to Mr. C, were all marvelous, but he ended up choosing five songs for the EP.

These are the carrier single "Galak," "I'll Always Be There For You," "Pakiusap," as well as "Susan" and "Bitaw," which were the winning pieces of the class for "Awit Nasyonalista." This annual songwriting competition at the Ateneo is responsible for putting together some of the most popular bands today such as Parokya Ni Edgar. Each song reflects what every typical boy is going through at this age. They are heavily influenced by the music of their parents, which enables them to fuse the old and the new to make a sound of their own.

The 5-track EP also includes the music video of "Galak," directed and produced by Toma Cayabyab. The son of Maestro Ryan is an aspiring filmmaker who says that he would like to take up Film and Audiovisual Communication at the University of the Philippines. His sister Christine is now in her last year at the College of Music where she majors in Choral Conducting.

"Their music is very 'now' but I think they are old souls because they like the music of yesteryears. During the recording, they treated it as if it was a school project, so it came out perfectly," said Mrs. Cayabyab.

During the press conference organized by Sony BMG, four boys were chosen to represent Mboys '09—John Tantoco, Michael Shimamoto, Toma Cayabyab, and Pietro Lazatin. They narrated that they spent their weekends recording their songs so that the activity wouldn't interfere with their schoolwork.