Nancy Castiglione wants to inspire local artists with her music 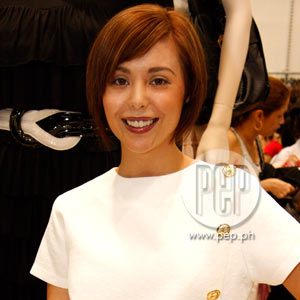 "I just like to dance and basically open the doors for a new genre to local artists, make people dance and forget about their problems and have a good time," says Nancy Jane, more popularly known as Nancy Castiglione.

During the opening of the new store of Topshop at Greenbelt 3 in Makati City, last Friday, May 16, PEP (Philippine Entertainment Portal) was able to talk to Nancy about her new career.

Nancy said that her schedule has been hectic since she launched her album. "After I launched the album, I flew to Canada. I flew to visit my nephew's first birthday. Nag-launch ako ng album sa Embassy Bar April 2, and then I flew na April 7. And from April 2 to April 7 diretso na ang trabaho ko."

As a newbie singer, Nancy admitted that she was not confident during her first performance in the MYX Awards last March. She recalled, "I was really, really nervous. And it's my first time, di ba? So, I can see my progression na sa MYX, I feel like, you know, I perform the song. Happy to do it and siyempre at the same time I'm very, very scared."

In her following gig, Nancy felt more confident during her perfomance. It was her album launch held at the Embasssy Bar in The Fort, Taguig City.

"I was more confident kasi it's my album launch, you know, you feel confident, I was really feeling the vibe being in Embassy, where my music is sort of at the right venue. That's where I want my music to be played. I just had a good vibe that day so maybe that's why that perfomance was a little bit better."

"I started to own the identity of Nancy Jane. Kasi even though you love the music, it's different from modeling business or being an actress. Plus, siyempre may pressure din kasi I'm the first local artist in this genre of music. Malaking pressure yun, di ba?"

NEW MUSIC GENRE. Nancy's music, which is desrcibed as house music and techno pop, actually fits her lifestyle. "It's my favorite type of music and the lifestyle is also my lifestyle, so feeling ko bagay sa akin," she explained.

Nancy believes that her music "opens the door for another local genre."

Although some Filipinos were already familiar with techno pop or house music, there are very few music artists who perform this genre. With her album, Nancy aims to give opportunities to artists who are interested in this type of music.

"We have lots of talented DJs in the Philippines," said Nancy. "I mean, for me, even as good as Tiesto, yung mga ganyan, di ba? I think it opened the door. You know, if I can start something and even house artist, they just make the Philippine music industry bigger."

As a newcomer, Nancy is expecting criticism especially now that there is no one else who plays the same music as hers.

"I expect some criticisms but I take these criticisms as constructive. I want people to understand and realize na I can't compare myself to anyone locally. I'm sort of doing it... parang feeling ko bulag ako, e.

"Competition is always healthy and I welcome it. And for the industry locally, I think it's a good thing. It's scary, it really is scary, you know, no one wants to be criticized. It hurts but kasama yun and it's growing pains. I should take it constructively. I don't mind getting angry anymore."

She then clarified that competing with other local artists was not her primary objective when she decided to do the album. "I just want many people to dance. I just like to dance and basically open the doors for a new genre to local artists, make people dance and forget about their problems and have a good time."

WHY NANCY JANE? Nancy admitted to PEP that she is now more focused on her singing career rather than on acting.

"If I'm recording and acting siyempre either both will suffer or one will suffer. And since I've done acting for a while already and I really want to focus on singing, I decided nga na I'll rest din muna sa TV."

But she assured the public that she won't leave the first career that she loved. "I'm really focus on the album muna but I'll be back on acting eventually," said Nancy.