MCA Music to release "Sex and the City" soundtrack 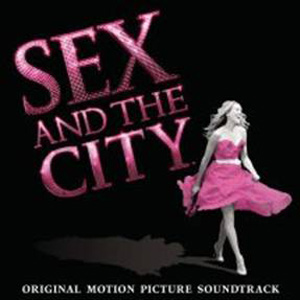 Carrie Bradshaw (Sarah Jessica Parker) is back with her posse in Sex and the City: the Movie. Take home the excitement by grabbing a copy of Sex and the City: Original Motion Picture Soundtrack soon to be released by MCA Music.

Paint the town red while listening to the official soundtrack of Sex and the City! Reminisce about the sexy misadventures of Carrie, Miranda, Charlotte, and Samantha of the beloved HBO television series by grabbing this CD soon to be released by MCA Music.

The official soundtrack features songs from Fergie, Jennifer Hudson, Duffy and Jem, as well as Indie.Arie, Al Green, and Joss Stone. The film version of Sex And The City is scheduled to open in theaters nationwide starting on May 28.

The Sex and the City: Original Motion Picture Soundtrack was created by music producer Salaam Remi (Nas, Amy Winehouse, the Fugees). According to the film's writer and director Michael Patrick King, Remi was challenged "to create a soundtrack for the ultimate movie about love."

In response, Remi wrote a brand-new opening number for the film, "Labels or Love," which, as sung by pop superstar Fergie, re-imagines the series' iconic theme as a fabulous pop song.

"I grew up watching Sex and the City," Fergie says, "and I know a lot of my girlfriends did as well. We felt like these characters were our friends, so to be a part of this project has been amazing. I'm such a fan of the show and am very flattered that they asked me to be involved."

The soundtrack also features a brand-new song from Oscar-winning diva Jennifer Hudson, who plays a personal assistant to Carrie Bradshaw (Sarah Jessica Parker) in the film. Hudson shows off her powerful pipes on "All Dressed in Love" (written by MC Jack Splash and Gnarls Barkley's Cee-Lo Green), which plays over the end credits. "Jennifer makes it almost impossible not to dance out of the theater," says King.

The remainder of Sex and the City: Original Motion Picture Soundtrack is an eclectic mix of songs from such artists as Indie.Arie, Jem, Al Green and Joss Stone (with Stone's vocal recorded especially for the soundtrack), and indie bands Morningwood, The Bird & the Bee, and The Weepies. The disc also includes classics from Nina Simone and Run-D.M.C.

"My hope for the soundtrack is that listening to the music will create a special memory for the fans," King says, "something to help them remember the movie about the love lives of their favorite girls: Carrie, Miranda, Charlotte, and Samantha."

Sex and the City: the Movie continues where the acclaimed, award-winning television series left off by following the adventures of the show's fashion-forward foursome as they deal with sex, love, and relationships in the city that never sleeps. It stars Sarah Jessica Parker, Kim Cattrall, Kristin Davis, and Cynthia Nixon who all reprise their roles, while Chris Noth, David Eigenberg, Evan Handler, and Jason Lewis return as the women's love interests. The film was written and directed by Michael Patrick King, and produced by King, Sarah Jessica Parker, John Melfi, and Darren Star, who created the series based on the bestselling book by Candace Bushnell.

TRACKLISTING. The Sex and the City: Original Motion Picture Soundtrack is composed of the following songs:

2. "All Dressed In Love" - Jennifer Hudson

4. "The Look Of Love" (Madison Park vs Lenny B Remix) - Nina Simone

13. "How Can You Mend A Broken Heart" - Al Green featuring Joss Stone

15. "Sex and the City Movie Theme" - The Pfeifer Broz. Orchestra