Kyla shares milestones, most embarrassing moments during her 15 years in the biz 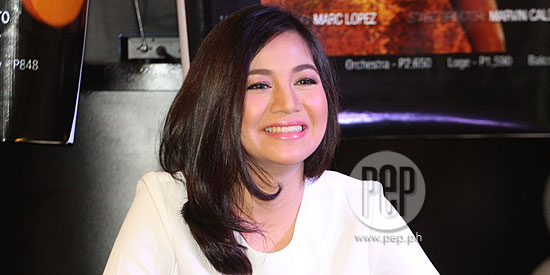 Tagged as the Queen of R&B, Kyla will mark her 15th anniversary in the music industry with a major concert titled Flying High. It will be held at the Kia Theater in Cubao on November 20.

Although she couldn’t disclose her lineup of songs, Kyla said that it will surely include her hit song “Hanggang Ngayon” and her rendition of “On The Wings of Love.”

Incidentally, "On The Wings of Love" is the theme song of the ABS-CBN primetime teleserye of the same title, starring James Reid and Nadine Lustre.

Kyla is grateful that her rendition is garnering positive feedback from listeners, particularly JaDine fans.

“Thankful din ako sa series because I was able to reach out to a younger crowd, particularly the JaDine fans.”

Does she plan to invite James and Nadine to watch her Flying High Concert?

Kyla revealed that her guest performers will include Jay-R, Erik Santos, Angeline Quinto, and KZ Tandingan.

As it is, Kyla and Jay-R have always been a tandem even when they were still with GMA-7.

"Si Jay-R alam naman nila na he's very talented. And yung genre niya is R&B, pareho kami, so I really wanted him to be in the concert."

As for Erik, Kyla said that they've previously recorded two songs, but have yet to perform together in a live show.

Looking back at her singing career, she couldn’t help but reminisce how she used to sing in lounge bars during her college years.

To date, she has nine studio albums and three compilation albums under her belt. Not to mention her recognitions from Myx Music Awards, MTV Philippines, and Awit Awards.

When asked about her career highlights, the singer's top-of-mind answer was when her music video for "Hanggang Ngayon" won at the MTV Video Music Awards’ (VMA) in 2001.

But more than the recognitions, Kyla maintained that what matters is her passion for her craft is stronger than ever.

EMBARASSING MOMENTS. Along with her accomplishments, Kyla also recalled some of her most embarrassing moments as a singer.

One memorable incident happened at a provincial show during her early years in the biz.

Kyla was rendered temporarily voiceless as she accidentally swallowed the moth.

The R&B singer said that she was really embarrassed about not being able to finish her song number, bus she had no choice but to cut it short.