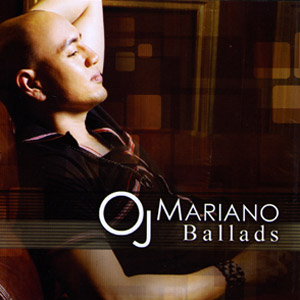 OJ Mariano is now promoting his 12-track album "Ballads" released under Star Records. The balladeer will also be performing with Rico J. Puno in the concert The Power of J, which will be held on June 5 at the Metro Bar.

OJ Mariano was first introduced to the public via Star in a Million Season 2 where he won 2nd runner-up and the "Texters' Choice" Award. The grand champion of this singing competition was Frenchie Dy while the 1st runner-up was Nyco Maca who now plays with the band Playground.


OJ, whose real name is Ramon Enrique, has released his second single titled "Sana'y Malaman Mo," a romantic song from hit maker Marlon Silva. This song is one of 12 tracks included in his second album titled Ballads released by Star Records. OJ's single has been chosen as the official theme song of the Mexican telenovela El Cuerpo del Deo aired every afternoon on ABS-CBN.


The 2006 Awit Awards Best New Male Recording Artist sat down with PEP (Philippine Entertainment Portal) to talk about his new album and his upcoming concert this June.

"I started making this album around December 2007. I made a list of my favorite songs while other songs were suggested by family members. There are two original compositions in Ballads, ‘Sana'y Malaman Mo' and ‘Di Ka Na Akin.'


Since joining this televised singing competition, OJ has become a recording artist, toured various malls to promote his CDs, and performed here and abroad. In fact, he has just come back to the country after performing for Filipinos in San Diego, California last May 5.

He points out that the song "Iniibig Kita" is composed by Maestro Ryan Cayabyab himself. "Ang kumanta pa lang niyan ay ang Philippine Madrigal Singers and the San Miguel Master Chorale. It's a song na all-male and ever since na napakinggan ko siya, sabi ko sarili ko na if I make an album, I'll make a version of the song."

This makes OJ the first solo artist to record this love song.

THE POWER OF J. OJ used to be the front act of Rico J. Puno in previous concerts but now, the Star in a Million alumnus now shares top billing with the OPM artist. Special guests include the Soul Siren Nina and Rufa Mae Quinto with standup comedians Le Chazz and Jeff Vasquez. The Power of J is produced by Front Desk Entertainment Production and DGA Entertainment.

Also, catch OJ perform regularly at the Sky Lounge of the Diamond Hotel and the Metro Phi Restobar.

BALLADS. OJ's debut album is titled One Dream Come True and has the carrier single "After All This Time." His follow-up CD Ballads makes use of OJ's crooning voice to bring life to these chosen songs that are well suited to his vocal range.


Also featured in the new album is the Peabo Bryson hit classic "If Ever You're In My Arms Again," the album's carrier single. Ballads also features OPM revivals such as Boy Katindig's "I Will Always Stay in Love This Way" and "It's Over Now" by Joey Albert and Louie Ocampo.

Other revivals in Ballads are "In Your Eyes" originally by George Benson (chosen as another theme song for the ABS-CBN Koreanovela Lovers), the classic favorite "Sukiyaki," Eagle's big hit "Love Will Keep Us Alive," and the haunting "Dance With My Father" by Luther Vandross.


All songs are arranged and produced by Paulo Zarate. The album's executive producers are Dennis G. Arce and OJ Mariano himself.

Part of the sales of the "Ballads" album will go to the projects of the Environmental Protection Program of Quezon City, particularly, the Sweepers' Brigade Project as its beneficiary.

1. I Will Always Stay In Love This Way

5. If Ever You're In My Arms Again

7. Love Will Keep Us Alive

10. Dance With My Father