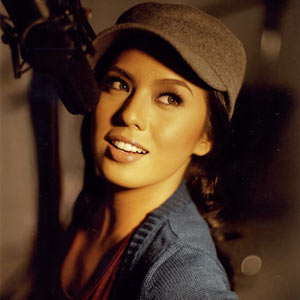 "This would be my first attempt into the world of songwriting," an excited yet tense Nikki Gil told PEP during the launch of her album titled Hear My Heart last May 24. Her second CD is released under EMI Philippines.

It took Nikki Gil quite some time to come up with a follow-up project to her 2005 eponymous debut album. But according to the singer-actress, it was worth the wait.

"I'm very excited about it kasi matagal ko ng kinukulit ang EMI na irelease ‘to. It's actually two years in the making since my first album so I really wanted it to be extra special," said Nikki to PEP (Philippine Entertainment Portal) during the launching of her second album. The CD titled Hear My Heart was formally launched at Dencio's Bar and Grill at the TriNoma Mall in Quezon City last May 24.

What took her so long to come up with a follow up? "Maybe timing," replied Nikki immediately. "There were so many things happening to me at that time. I was just starting up in the industry so there were these random projects that I had to honor first and medyo singing took a backseat because I got into hosting, I got into acting, being a VJ."

NIKKI THE SONGSMITH. The long gap between her first and second album proved to be a blessing in disguise as it provided the young singer ample time to try her hand at songwriting. Teaming up with little sister Danela, the two collaborated to produce the album's title track and the upbeat number titled "Friday."

"I wanted to contribute naman to the OPM scene with at least two tracks," she explained. The novice songwriter initially felt nervous about putting out her original composition. "I was apprehensive at first because we all know that the more effective songwriters only come up with songs based on their personal experiences. So, natatakot ako na pag naglabas ako ng kanta na that I solely wrote then they might say ‘Uy, para kanino ‘yan...sinong pinag-uusapan' may ganoong factor."

COOL WITH COVERS. Maturity brought upon by personal experiences also allowed Nikki to sing now with more conviction as compared before when she was still a naïve upstart trying her luck in the business.

"I can say I sing with more heart now because most of those tracks they're actually things I have gone through in life."

Nikki candidly admitted that if she would only have it her way, she'd love to produce an album comprised of all-original songs written by local composers. But she also understands the appeal of recording well-loved hits to instantly catch the attention of the listeners.

"Well, trend dictates that I do covers," acknowledged Nikki sans any hint of bitterness. "Covers are effective because they were hits before so parang formula na ‘yan, e, tried and tested na ‘yan dati. All you have to do is bring it to present times—tweak the arrangement a bit and add a different flavor to it."

UNABASHEDLY ROMANTIC. The song choices, as expected, cater to the Pinoy's delicate taste when it comes to music.

"Mostly love songs because Filipinos are very into that and so am I," she said with a laugh. The label gave Nikki liberty to choose the songs, as presented to her, and even accepted the some of the young singer's suggestions. Wearing a grin, Nikki confided, "Some, like I really force them to put it in there like "On my Knees," "Buses and Trains" and the two original songs. Pinilit ko talaga ‘yon."

As cliché as it may sound, Nikki stressed that she's very proud of this new record simply because she invested more of herself as compared to her self-titled debut album. The singer-actress pointed out that this album is a reflection of her growth in the music industry.

"Two years in the business, countless hours of rehearsal and actual performances, and exposure to thousands of different audiences have kind of matured me musically," wrote Nikki to her fans. "This album should project a more real me and hopefully strike a stronger bond between me and my listeners."


Nikki is currently busy finishing a teleserye for ABS-CBN's Susan Roces Collection titled Florinda. Aside from being an ASAP ‘08 co-host, she is also expected to be one of the hosts of Pinoy Dream Academy Season 2.

"When Did You Fall In Love With Me" (Chris Rice)

"I Just Want To Be Your Everything" (Andy Gibb)

"If You're Not The One" (Daniel Bedingfield)

"So Much In Love" (Sheena Easton)

"Let Me Be The One" (The Carpenters)

"On My Knees" (Jackie Velasquez)