Carly Rae Jepsen attracted to bad boys in the past; shares thoughts on being in love 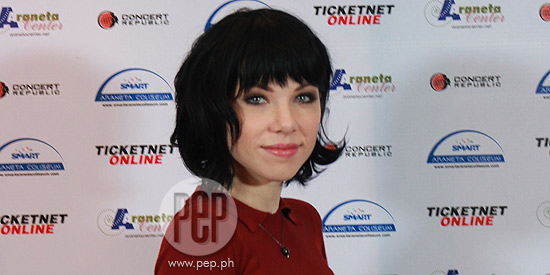 Canadian singer-songwriter Carly Rae Jepsen returns to the Philippines for a one-night only concert.

The "I Really Like You" singer will perform at the Smart Araneta Coliseum tonight, September 14.

Before the big show, the 29-year-old performer met with the Philippine media at EDSA Shangri-la Hotel yesterday, September 13.

During her 20-minute intimate interview with the press, Carly answers questions about romance and songwriting, and how being in love affects her music.

She first explains her writing style: “A part of me, there’s a realist, then there is some sort of fairytale-ish side in my personality, and I think I constantly battle with these two.

“But when it comes to music, that’s the place where your imagination can be at play. You don’t have to think about the rules of the world.

“It’s a lot about having that child-like imagination when you have also no filters about being scared of the idea being stupid.”

Additionally, when it comes to finding new song materials, the “Call Me Maybe” singer admits that inspiration is literally everywhere.

Carly quips, “when I go to dinners, and when I meet somebody new, I ask them about their love life,” saying how she quickly turns the stories into songs after their chit-chat.

She adds: “I wasn’t really sure what would happen in this album. I knew that I would like to make it feel more mature, I think I did try.

“At the end of the day I wasn’t really sure what the outcome would be. [But] it didn’t really matter how this would be received, it’s more like, these are my favorite tunes.”

ON LOVE AND DATING. With most of her songs being all about love; “Call Me Maybe,” “I Really Like You,” and “Emotions,” to name a few, Carly explained why she often comes up with romantic lyrics rather than “empowering women” kind of tracks.

She clarified: “I believe that you can still be empowered when you’re in love. I love the idea of being strong on my own, but I don’t think I’d lose my strength if somebody is by my side.”

She also gave her personal dating advice when it comes to looking for the right person you’d want to spend your life with.

She confesses, “I think, in general, look for a kind person.

“I think that in my youth I was just a babe-in-the-woods teen style, I was always going for the bad boy, but I realize as I’ve gotten older that it’s much more attractive to find someone kind.”