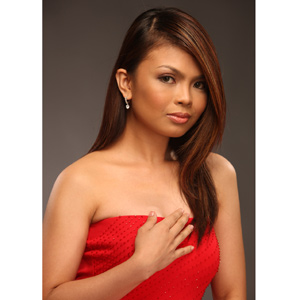 Raki Vega has been chosen by Star Records to be its bet in the upcoming ASEAN IKON Philippines competition. The 27-year old singer is the grand prize winner of ABS-CBN's singing competition Born Diva.

Can Raki Vega do what Vina Morales did during last year's ASEAN IKON competition? Last year, Vina brought pride to the country when she was hailed as the winner in the solo artist category of the regional singing competition held in Malaysia. This year, Raki has been chosen by Star Records to be its bet in the upcoming ASEAN IKON Philippines competition. She will be competing with other Pinoy singers for the chance to represent the Philippines.


The record label has also allowed Raki to start recording for a concept cover album that will showcase her vocal power and ingenuity. TV host Boy Abunda was so amazed by her talent that he asked her to sing the Michael Jackson original "Childhood" for his album Love Life, which was released earlier this year. In the press conference to promote the album, Boy was quick to express his fondness for Raki's ability to sing beautifully. Boy Abunda has been given the Gold Record Award for the brisk sales of his album Love Life.

"It feels fortunate to be seeing the breaks coming at such a fast rate," Raki said about the string of blessings coming her way.


A long-time choir singer and a voice coach herself, Raki was introduced to the public years back when she won the grand prize winner in ABS-CBN's singing competition Born Diva. She represented the Philippines in the World Championships of Performing Arts (WCOPA) held in Hollywood last year. She was able to reach the grand finals along with Jed Madela, the Cercado Sisters, Reymond Sajor, and Aria Clemente. She has done musicals and performed for numerous corporate shows and big-time events.

"Music is life and it has been a part of me ever since, like breathing," expressed the Cebuana lass.

Raki was also tapped to record the female track of ABS-CBN's Lobo's theme originally sung by Martin Nievera. In the process, she was given the privilege to take part in the music video of "Ikaw Ang Pangarap" with the Concert King.

An endorser of Clara International beauty products, Raki feels truly blessed to be able to get good opportunities in quick succession. Her Christian faith and optimism have enabled her to look past life's troubles and focus on what the present is giving and what the future holds for.

As icing on the cake, she is now being managed by STAGES, a group of Christian artists known to breed highly potential acts. She shared, "Ang blessings na dumadating sa akin ay overpowering. For me, I always see to it that I give my 100 percent in everything I do. I offer everything to Him."

With all these achievements, Raki has lived up to her title as the "Ultimate Born Diva," proving through talent, determination and humility that she really is one.