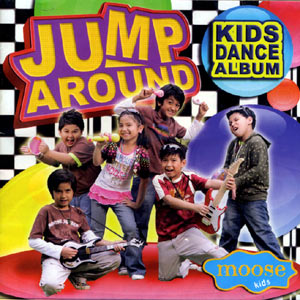 
Groove to the music and dance to the beat as the Moose Kids—Nash Aguas, Basty Alcances, Aaron Juntas, Jairus Aquino, Sharlene San Pedro, and Makisig Morales—unleash their talents on the dance floor through their Jump Around Kids Dance Album. Get to see them perform live when they embark on their Moose Kids mall tour starting June 21 to August 2.

The members of The Moose Kids are Nash Aguas, Grand Questor of the 1st Star Circle Kid Quest, Sharlene San Pedro, first runner-up of Star Circle Kids Quest and starred in ABS-CBN's fantasy series Princess Sarah, Basty Alcances, aside from being part of Goin' Bulilit he is also part of the cast of Sa Piling Mo, and Aaron Juntas, who started in Star Circle Kid Quest and starred in the weekly sitcom, My Juan and Only. Jairus Aquino, known as the Pambansang Bestfriend Ng Pilipinas, is also part of this young singing group. He played Lembot in the kiddie series Kung Fu Kids. Completing the group is Makisig Morales, who first became known by the public through the singing competition Little Big Star. He was the lead singer of the youngest boy band Mak and the Dudes, and rose to fame by playing a super hero in Super Inggo.

Featured in the album are songs such as "Jump Around," "Kokobom," "Moose Dance," "Rain Rain Go Away," and "Let's Dance & Shake It." Plus, follow the rhythm on their minus-one. Get to see these kids live with their mall shows and campus tours as they launch their newest dance album for the whole family.

Catch The Moose Kids as they hold their mall shows on June 21 at SM North Edsa, July 19 at SM Marilao, July 27 at SM Fairview, and August 2 at SM Dasmarinas.

Grab your copies now. The Jump Around Kids Dance Album by Moose Kids is now available nationwide. It is distributed by Star Records and sponsored by Moose Kids.


ONLINE PROMO. To win one (1) autographed Jump Around Kids Dance Album, leave a comment answering our question below.

What is the name of the group composed of six young singers who have just released their dance album?


PEPsters who will answer the question in the comments section will have a chance to win an autographed copy of the Jump Around Kids Dance Album. The electronic raffle will take place on June 18 (Wednesday).

The five lucky winners will be notified when they can pick up the autographed album at the new Summitmedia office at the 7th floor, Cybergate 3 Robinsons Pioneer complex, Pioneer St., Mandaluyong City.


This promo is now closed. Thank you to everyone who participated. Winners will be notified when they can pick up their autographed CDs.