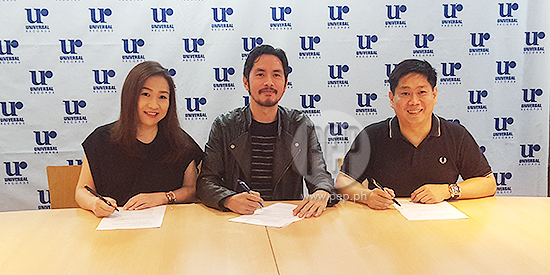 Rico Blanco is slated to return to the recording scene with the release of his full-length album.

The singer-songwriter officially signed up with one of the country’s leading record labels, Universal Records, on Monday, October 5.

In an interview with PEP.ph (Philippine Entertainment Portal), the “Your Universe” singer candidly talked about his experience with Universal Records.

Rico expressed, “It’s an honor to be part of this very prestigious family, well-known for giving the Pinoy music fans quality music over the years. So, being part of it now is a great honor for me.”

More than three years since his second studio album titled Galactik Fiestamatik was released in July 2012, Rico is now gearing up for his third studio album.

He explained, “I’ve been releasing singles now but it’s time, I feel that it’s time to come up with a new album that’s why I’m here.”

BACK TO BASICS. Rico is planning to release an all-Filipino album with 8 to 12 tracks this November.

The 42-year-old rock star has decided to go “back to basics” for his upcoming digital album, which veers away from the direction of his previous album, Galactik Fiestamatik.

He explained, “For this one I’ll try to use as little instruments as possible.

“Like I said, it’s going to be a back to basics album. I will avoid production tricks.”

Before making a mark as a solo artist, Rico was known as the main songwriter and guitarist of one of the most popular '90s rock bands, Rivermaya.

Since his departure from the band in 2007, Rico has expressed his desire collaborate and work with other musicians to veer away from his former band’s trademark sound.

Read: Rico Blanco learns not only to rock but also to relax

For his new album, Rico sought the help of fellow musicians including former Eraserheads members Buddy Zabala and Raimund Marasigan as well as Roll Martinez of Hale.

“But for this album that I’m working on now, I’m gonna stick to that.

“I’ll have Roll, Raimund, and Buddy as my bandmates for all the songs as much as possible.

“And maybe one or two young and up-and-coming musicians to guest also.”

What inspired him to write the songs in his new album?

“I just decided one day to write as many songs as I can in the shortest amount of time and to write one song a day,” he recalled.

He continued, “In like a couple of weeks I already had all the materials that I need for a new album.

“Since then, I replaced a couple of songs with some new one, but I try to not spend too much time and just really capture where I am, like whatever comes to mind, that’s it.

“Whatever topic comes to mind, that’s what I’m gonna write about.

“I guess it’s the least contrived of all my albums in terms of topic per songs.

“Parang I just get a guitar every day and play a couple of whatever chords that come along and just think of that first thing that comes to mind, that’s what it’s going to be about.

“I didn’t have to be in that situation or have to be sad or happy but kung iyon ‘yong topic dumating sa akin, yun ‘yon.

“So it’s not very autobiographical, it’s just really like a bunch of songs that is more about feeling, like a stream of consciousness.”

DIGITAL ERA. At the moment, Rico is promoting a new song with iconic rock band Parokya Ni Edgar titled “Sing.” Rico revealed that this collaboration has been long overdue.

Rico recounted, “I think I saw… it might have been Chito [Miranda] or one of the boys.

“I saw a post na they’re working on a new album and I said, ‘Hey! Let’s just do that song already!’

“And it turns out, they had this song na they were working on tapos gusto nila ilagay ko yung inputs ko do‘n para maging totoong collaboration siya.

Asked what his stand is about OPM industry going digital, Rico believes that the digital music industry in the country has yet to improve and that there still is a need for a physical release of an album.

Rico further explained, “That’s what I’ve been doing for a couple of years.

“I’ve been releasing stuff straight to digital and that’s great to just put out stuff out there immediately.

“Sometimes, since I finished recording the song, it’s out there, that’s great.

“Online, the penetration is not that high in the Philippines, yet.