Sabrina to represent the Philippines in 2015 Asia Song Festival 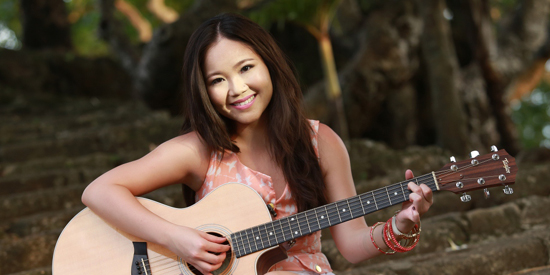 Sabrina will compete in the 2015 Asia Song Festival to be held on October 11 in Busan, South Korea.

Sabrina will be representing the Philippines in the 2015 Asia Song Festival.

Tagged as Asia’s Acoustic Sweetheart, she will be take part in the competition to be held on October 11 at Busan Asiad Main Stadium in Busan, South Korea.

Sabrina will be performing alongside Asia’s top music acts like KPop artists EXO, GOT7, Red Velvet and B.T.S, NGT48 from Japan and William Chan from China.

She is also scheduled to collaborate on stage with KPop group B1A4 for their song “Lonely” where Sabrina will sing in Korean.

The Asia Song Festival, which has been held in South Korea every year since 2004, gathers the best singers in Asia. It is sponsored by the Ministry of Culture, Sports, and Tourism.

Sabrina recently conquered Malaysia when she performed at the Kuala Lumpur Lake Garden Festival last August 23 at Padang Merbok in the capital city.

She was the only Filipino to sing at the festival alongside other Malaysian, Indonesian, Singaporean and other acts from Southeast Asia.

She also did photoshoots, radio guestings, retail and TV appearances during her tour in Kuala Lumpur, Malaysia in time for her latest album I Love Acoustic 8.

To date, she has also traveled to Indonesia, Thailand and Singapore where she had successful concerts and promo tours

She just released her latest album I Love Acoustic 8, which debuted at No. 1 on iTunes Philippines and Indonesia and also on Top 10 of iTunes Thailand, Singapore and Vietnam.

The album is also released in CDs all over Asia making Sabrina one of the only few Filipinos to release a CD in the region and cementing her status as Asia’s Acoustic Sweetheart.

In the Philippines, I Love Acoustic is now on the Top 10 of the country’s largest CD retailer Astroplus.

The Malaysia version of the album includes her duet with Malaysian singer Natasha Sass with the Malay version of Freddie Aguilar’s iconic song “Anak” which is titled “Terima Kasih.”

Indonesia’s version had Sabrina record a duet with one of their top singers Chilla Kiana for the songs “Thinking Out Loud” and “Love Me Harder.”

Now on its 8th volume, her I Love Acoustic series plus Acoustic Love Notes has sold more than 300,000 units all over Asia and were certified Platinum and Gold in countries like Indonesia, Thailand, Singapore and Malaysia and also released in Korea and other Asian countries digitally.

Sabrina’s I Love Acoustic 8 is now out on CDs at Astroplus and Astrovision outlets, through digital downloads via Spinnr and iTunes and through streaming via Spinnr, Apple Music, Spotify, Deezer, Guvera, and Rdio.