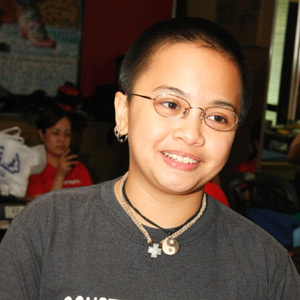 Aiza Seguerra's ten-track album produced by S2S Singapore will soon be released in the Philippines and nearby countries such as Singapore, Indonesia, and Malaysia.


As one of the cast members of Atlantis Productions's comedy musical Avenue Q, Aiza Seguerra will be traveling to Singapore to perform at the Esplanade Theatre from October 31 to November 16. But this won't be the only chance that viewers in Singapore will be able to see Aiza perform on stage.

During the rehearsals of Avenue Q, Aiza Seguerra updated PEP (Philippine Entertainment Portal) regarding the 10-track album that is expected to launch her international singing career. "It will be released on June 16 (Monday). We did this album in just 17 days...during the last week of April.


According to Aiza, she performed all these songs with live instruments even though this is a studio album. The singer-actress plays Gary Coleman in Avenue Q, which is scheduled to run at the RCBC Plaza until June 22, 2008.

Will she be based in Singapore while promoting this album?

How did she choose the songs to be included in this album?

"They gave me a list of songs and from there, namili ako ng 15 songs. So from those 15 songs, pinili nila yung sampu," narrates Aiza.

Aiza's tenth album (which is also her first international album) is produced by S2S Singapore. She narrates how she got in touch with this Singaporean company.

Aiza is currently signed up with Star Records but on a per project basis.