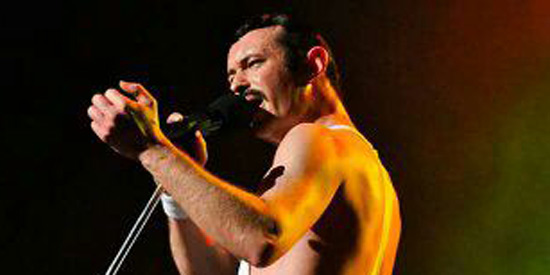 Who doesn’t get swooped up and carried away by the initial strings of “We are the Champions” and “Bohemian Rhapsody”?

The late Freddie Mercury penned these immortal rock ‘n roll classics and brought them to cult status with his band, Queen. Mercury is a certified rock legend, his career cemented by his four-octave vocal range and flamboyant performances. He passed away in 1991, but the band’s music lives on.

One Night of Queen is a touring two-hour stage show wherein Gary Mullen & The Works (what has been called the world’s premiere Queen tribute band) pay homage to the concert-going experience the rock icons.

This musical spectacle will be held at The Theatre at Solaire on October 24 and 25, 2015.

Gary Mullen shot to fame in 2000 after he joined a reality talent search called Stars in their Eyes, imitating Mercury. He and the band having been touring since 2002, not just covering Queen classics, but delivering an authentic concert experience. He sat down for a Skype interview with members of the Philippine press recently at the New World Manila Bay Hotel.

THE QUEEN EXPERIENCE. Mullen said that concertgoers can expect an energetic show. “It’s all about audience participation. We actively encourage everybody to sing along, jump up and dance, to play air guitar, we want everyone to get into the show, and basically have a big party.”

Mullen acknowledges Queen’s music is timeless and ageless. It has been remade by numerous artists before.

“I’ve been a fan of Queen all my life. When I was a kid, I would sing their songs in the bedroom, pretending I was Freddie. I welcome the chance to put on cool costumes and run across the stage. It’s just very, very cool. I feel like I’m 8 years old, singing in my bedroom--except that I’m not 8 years old and I’m singing to the audience and just playing rock ‘n roll. This is a great job for me.”

Mullen has been a Mercury impersonator for more than a decade, proving that he has the talent and drive to deliver a truly entertaining show.

“When I started doing this, I started watching more videos to try to get the movements more like Freddie. The whole idea of the show is to create a moment in time that we’ll never see again, and that’s Freddie in Queen.”

PSYCHED ABOUT THE PHILIPPINES. When asked about impressions of the Philippines, he admitted that he knew very little, but heard from a friend that Filipinos “really love music and you really embrace music. I’m looking forward to coming and experiencing it myself,” he said, in his charming Scottish accent.

“I’ve always wanted to go around and see the world. And this job has given me the chance to do that. I can be a tourist and be an entertainer at the same time. We’re all very, very excited to see the Philippines and get to perform there. As an artist, an entertainer, it’s great to perform somewhere new. I get to go to places a lot of people would never get a chance to go to. One of my goals is to see as much of the world as I can and play to as many people as I can. Just have a good time.”

FAVORITE DISCOGRAPHY. He says that “Somebody to Love” is his favorite song by Queen.

“It’s one of the songs in the show when we say to the audience: ‘You be the choir, sing along!’ It’s one of my all-time favorite songs.”

He also loves performing the song for a live audience because fans have plenty of opportunities to sing along.

“I also love performing ‘I Want to Break Free’ because it’s such a fun song and everyone remembers the video of Freddie in the mini skirt, you know?”

After almost 15 years spent performing in front of vast audiences, one that has left an indelible mark is the band’s participation at the BBC Proms in the Park.

He narrated, “We got asked by BBC in London to be part of the Hyde Park concert in front of 45,000 people. It was 6:30 in the evening and it was daylight. We don’t usually perform during the day. It’s usually during nighttime when you can’t really see the audience. This is one night when you can see everyone and we were all terrified. It was like: ‘Oh my God!’ It was on TV too and we didn’t want to go ‘Argh!’ [I didn’t want] my voice to squeak or the amp to blow up or fall off the stage. We had 45,000 people singing to ‘Radio Gaga,’ you know? It was just a great night!”

FLEXING HIS VOCALS. What is the biggest challenge of mounting a tribute show like this?

“Every time we do a show, every tour, we try to put a song that’s challenging for the band. To sing them every day…I warm my voice up a lot before the show to make sure I can hit the notes. Among the most challenging songs are ‘We are the Champions’ and ‘Bohemian Rhapsody.’

“All the songs are very, very challenging because Freddie had such an amazing vocal range. He would always go really high and really low and really high. It keeps my vocals exercised.”

When asked whether he had met any Queen band member, Mullen revealed, “I met Brian May in 2008. He is such a cool guy: so nice, so friendly. He said: ‘Enjoy your tour.’ He gave me a hug and the last thing he told me was: ‘Keep up the good work, you’re doing great!’ I was blown away.”

One Night of Queen in Manila is the group’s only stop in Asia between shows that they are staging in Europe this October.

Among the songs that audiences can expect to sing and dance to are: “Save Me”, “Radio Gaga,” “Killer Queen,” “A Kind of Magic,” “Under Pressure,” “Another One Bites the Dust,” “We are the Champions,” “Somebody to Love,” “Bohemian Rhapsody,” “I Want to Break Free,” “The Show Must Go On,” and “We Will Rock You.”

Tickets are available at TicketNet and TicketWorld outlets. To contact TicketWorld, call Tel. No. 891-9999 or visit Ticketworld Online.