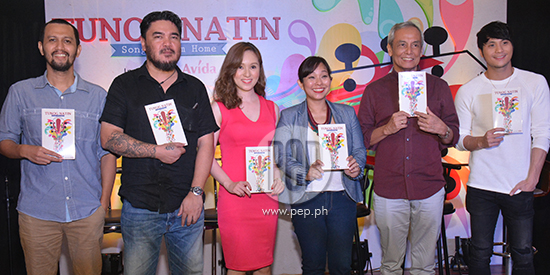 Jim Paredes, Johnoy Danao, Jonathan Ong, Princess Velasco, and Anjo Resurreccion of 1:43 band were among the artists featured in a compilation album featuring classic OPM songs with a modern twist

The second edition of Tunog Natin: Songs From Home was released in celebration of Avida Land Corporation's 25th anniversary.

It was officially launched earlier today, October 13, at the Avida Showroom in Glorietta 4, Makati City.

In an interview with PEP.ph (Philippine Entertainment Portal), Avida’s Marketing Head Tess Tatco noted that this project is in line with the company’s ongoing advocacy to “keep the Filipino geritage alive,” and bring back Original Pilipino Music (OPM) to the public's consciousness.

Tess, who also served as the executive producer of the commemorative album, told the press, “We’re always, you know, a supporter of any Filipino talent may it be in types of cuisine or music.”

Tess further noted, “Parang usually when you go home, even in any part of your life, you always associate it with music and home is the biggest milestone of your life, e.

“And usually you associate that with...music, with people.

“It’s part of our culture and since we are bringing in families, friends, what better way to celebrate it but you know, with music of our own time or generation.”

TUNOG NATIN. The first edition of the album, which was released in 2011, tapped 16 promising and established Filipino artists to produce 10 tracks—3 originals and 7 covers of classic OPM songs.

The second edition of Tunog Natin also features the music of the Bloomfields, Moira dela Torre, Markki Stroem, Thor Dular, and many others.

Jonathan Ong of Sonic State Studio did the arrangements for the songs while Jim Paredes was tapped once again as creative consultant. A new batch of musicians interpreted the songs to evoke the current theme of the company which is “inspired living.”

Jonathan explained, “When they said that, sabi ko, ‘You know, we have to make an album that evokes that kind of emotion.’

“But there are new songs din naman na, ‘Uy I really like the feeling of this.’

“So parang I was thinking of the OFWs natin, alam mo namimiss na yung homes.

“Eventually, the CDs will reach them overseas.

“To hear something like this, it makes home closer to them.”

What were the considerations in choosing the songs to be included?

Jim answered, “Yung pagpili ng songs, they have to be recognizable for one.

“Maraming bagong songs na magaganda pero they still have to earn their mileage so to speak.

“Specially for people who live abroad.

“Kailangan yung makarelate sila sa something that have been a soundtrack of their lives at one time being working in an office, or growing up here.

“Dapat it evokes a feeling of a personal experience which happened in the Philippines.

“Parang ganun yata yung one of the qualifications in putting the song.”

The songs on the track list include Regine Velasquez’s “Tuwing Umuulan,” and Francis Magalona’s “Kaleidoscope World,” among many others.

Even though classic songs are part of the album, the artists assure that young listeners will still be able to relate to the music through the new arrangements.

“So in that sense, makakarelate din kami sa newer market, as well.”

Will there be a third edition of the album?

Tess answered, “Definitely, we would like to produce another one that’s why we all need your support and spread the news, as well, that there’s this album and support our own Filipino talents.”

She continued, “Hopefully, by spreading that good news and then bringing them together in one venue and encouraging people to listen to our own type of music, then we will probably and hopefully produce another one in the future.”

OPM ARTISTS. Aside from Jim Paredes, some of the artists featured in the album were also present during the press launch, including Johnoy Danao and Princess Velasco.

Princess admitted that she was flattered when she was chosen to be part of the album.

The acoustic singer said, “This is my second time to be in an Avida Tunog Natin album and of course, sobrang malaking karangalan din sa akin.

The ASAP Sessionista performer also revealed that she got a little emotional while recording the song after she gave birth to her baby boy.

“And when I was singing it, it was siguro mga a month or two lang after I gave birth.