Mariah Carey given a royal celebration in Eastwood City 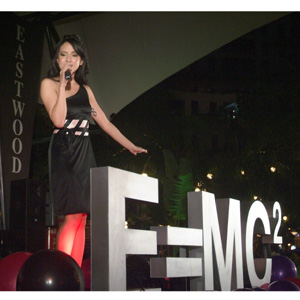 Despite her absence in the country, Mariah Carey was given a victory party fit for a queen last Friday, June 13, in Eastwood City, Libis.


Mariah Carey is already happily married to actor and rapper Nick Cannon, but wedding vows and golden rings have certainly not hampered this talented diva from still conquering the music scene.

Having been touted recently as the only artist ever to beat Elvis Presley in having the most number of chart-topping hits worldwide, Mariah Carey was hailed and honored last June 13 in Eastwood City, Libis. This victory party celebrated the smashing success of her newest album, E=MC2. This 14-track album hit gold in the Philippines just eight days after its release, with its carrier single "Touch My Body" effortlessly ruling the airwaves.

"Touch My Body" is Mariah's 18th chart-topper since her musical debut in 1990. The success of this song also catapulted the 38-year-old siren to the Number 2 spotlight in the Billboard records—next only to The Beatles, who had 20 worldwide hits, making them cling on firmly to the top spot. The King of Rock ‘n Roll, Elvis Presley, had 17 hits in the Billboard charts.

Richard Poon ("My All"), Dianne Elise ("Bye Bye"), Chicosci ("Breakdown"), Miguel Escueta ("We Belong Together"), Pedicab ("Heartbreaker") and Zoo ("Always Be My Baby") all had explosive performances that were warmly welcomed by Mariah's avid supporters seated in the audience. Collectively called Mimi Lambs, these fans hooted and shouted as the singers rendered their own cover of a Mariah song plus a song from their own repertoire.

The event set-up in Libis was quite elaborate, with black, purple, and pink balloons lining not only the stage, but also the mini-runway that cut across it. The catwalk was used primarily by models garbed in exquisite timepieces for the fashion show held during the event. In line with the posh arrangements that pervaded the venue, a huge LCD screen was propped in the center and repeatedly played Mariah's music video of her smash hit "Touch My Body."

ALL HAIL THE QUEEN. Aside from the recent release of the Mariah VIP Card, which entitles the owner to several discount privileges in select establishments nationwide, the soulful siren also released a classy signature scent to match her sparkling personality.

With her own perfume line soon to be available in the market, Mariah joins the ranks of Latina beauty Jennifer Lopez, pop princess Christina Aguilera, and hip-hop maven Gwen Stefani in having a signature fragrance that mimics her vivacious outlook in life.

Labeled M by Mariah Carey, Mariah's newest perfume collection aims to embody her beauty, femininity, and glamour—traits that have always been associated with the singer throughout her eighteen-year career in the music industry.

MARIAH IN THE PHILIPPINES? At the event, PEP (Philippine Entertainment Portal) took the opportunity to ask a representative from MCA Music Inc. if a concert of the Queen herself could possibly visit the Philippines in the future.

"It really depends on her schedule," replied label executive Katherine Choy. "Actually she was in Japan last time and we brought some friends from the media to be with her there," she recalled. "It's really not impossible. If we find someone who's really interested [to bring her here], then, why not?" she said with a smile.