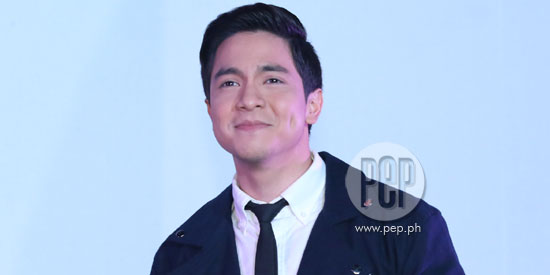 Alden Richards's second album, Wish I May, has already reached the Gold Record status even before it hit the music stores yesterday, October 17.

This became possible because of the overwhelming volume of pre-orders on both the physical album and digital copy of Alden's album.

In fact, Wish I May has been No. 1 in iTunes PH for one week now.

A Gold Record means that an artist or an album is able to sell at least 7,500 units.

Alden officially launched his Wish I May album, under GMA Records, at Cinema 11 in SM North Edsa this Saturday, October 17.

When the Kapuso matinee idol stepped on the stage, he immediately got emotional after seeing the throngs of supporters who came to his launch, which started around 6:30 P.M.

Some of these supporters arrived at the venue as early as 6 A.M. in hopes of getting premiere seats.

There were no empty seats inside the venue and more people were waiting outside.

During the launch, Alden performed four songs from his five-track album.

Fans went wild when Alden came out to sing his version of "Thinking Out Loud," an Ed Sheeran original and one of the signature Dubsmash songs in his Kalyeserye with Maine Mendoza.

He followed it up with the praise song "How Great Is Our God," a track Alden personally requested as his way of thanking the Lord for all the blessings that he has now.

Of course, the night will not be complete without Alden singing his cover of Bryan White's "God Gave Me You," a song which is very meaningful to the Kapuso heartthrob.

Unlike before, Alden was able to finish the song without shedding a tear. He even joked at the end, "Akala niyo iiyak ako, ano? Wow!"

But Alden did cry afterwards while thanking his family who he said "love na love ko ang mga 'yan," and while remembering his late mother, Rosario Faulkerson.

Alden, at one point, even looked up and said, "Ma, I hope you're happy."

The Pambansang Bae actually dedicated his second album to his mom.

Alden capped off his performance with the title track of his album, "Wish I May," composed by Agatha Obar-Morallos.

The other track in Wish I May album is an original song titled "Urong Sulong."

Before Alden's performance, the spectators were treated with performances from other GMA records artists like James Wright, Beverly Caimen, Ralf King, and TOP.

Alden's dad, Richards Faulkerson Sr., gladly obliged to fans who wanted a photo with him and even acknowledged chants saying "We love you, Daddy Bae!"