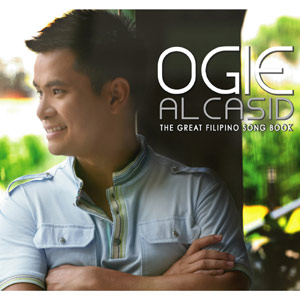 
Ogie Alcasid pays tribute to Pinoy composers and singers in his new album The Great Filipino Song Book, released by Universal Records. As way of celebrating his 20th year anniversary in the music industry, Ogie put together 16 Filipino standards and performed them for one collectible album.

Even if Ogie is himself a multi-awarded singer and composer, it was still a tall order for him to gather and interpret these beloved songs in his own endearing way. The CD's carrier single is his rendition of Marvic Sotto's "Kung Sakali," which was originally interpreted by Pabs Dadivas. Soon to be a staple in wedding ceremonies is "Ikaw Lang ang Mamahalin," the Louie Ocampo-Joey Albert original popularized by Martin Nievera.

Ogie's version of "Kahit Na" by Willy Cruz and a Zsa Zsa Padilla hit is among the most heartwarming tracks on the album.


"Kung Tayo'y Magkakalayo," first recorded and composed by Rey Valera, features one uncredited back-up singer who shall remain anonymous for now. "Ngayon," composed by George Canseco, is just one of the many outstanding vocal performances of Basil Valdez, .


The musical outburst of the ‘70s continues in The Great Filipino Song Book wherein romantic ditties such as "May Minamahal," "Bawat Sandali," "Doon Lang," and "Nais Ko," are given a new twist by Ogie.


The songs "Bato Sa Buhangin" by Snaffu Rigor and National Artist for Music Ernani Cuenco is one number that will appeal to listeners of all generations.


No anthology of great songs will be complete without the Florante hit "Handog," which the folk singer himself recorded. The classic song is included in a lot of singers' albums and Ogie cites this song as one of his favorites.


Another pop classic makes the cut. The song "May Bukas Pa" is a Rico J. Puno hit that is given a different interpretation by Ogie.


All 16 songs have one thing in common: Ogie first heard them during his childhood when he was only eight to ten years old. During his youth, it was hard for Ogie to be able to relate to them but as he grew up, these classic songs have become the theme songs of his life and his love life, just like many Filipinos.

"There is one song that came out when I broke up with my high school girlfriend," recalls the accomplished singer-composer. "Until now, every time I hear ‘Yakapin Mo Ako,' tumatagos pa rin sa puso ko."

Continue reading below ↓
Ogie Alcasid will celebrate his 20th anniversary in showbiz with a major concert at the Araneta Coliseum on September 27. His special guests will be Regine Velasquez, Janno Gibbs, Michael V, and Jaya.