Toni Gonzaga chronicles love story with Paul Soriano through album; recalls her wedding, "It was just him, me and our forever.” 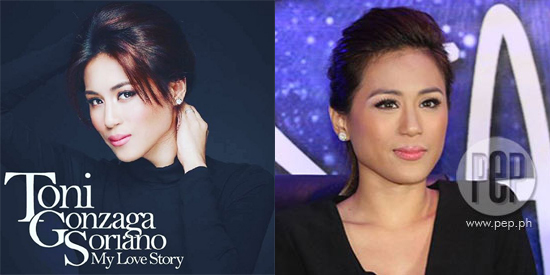 In Toni Gonzaga's new album My Love Story, she recounts the journey of her love story with Direk Paul Soriano, whom she married on June 12, 2015.

“Music moves you in different ways. And when you’re in love, it echoes the emotional chord of your heart.”

Toni Gonzaga can be heard saying these words in her latest album, Toni Gonzaga Soriano: My Love Story.

Four months after her wedding with long-time boyfriend director Paul Soriano, the Ultimate Multimedia Star announced on her Instagram account that she is set to release this new album this October.

The 14-track album includes seven songs, six revivals of foreign songs, and a rearranged version of her 2007 hit “Catch Me I’m Falling.”

Each song also has an interlude wherein Toni recalled details about Paul's courtship and their 2015 wedding.

LOVE STORY WITH DIREK PAUL. In the introduction of her album, the singer-actress candidly talked about her feelings for her husband.

Toni’s new album is aptly titled My Love Story because she recorded love songs that perfectly suit her love story with Direk Paul: from the time they got together in June 12, 2007 to their wedding last June 12, 2015.

In the interlude, Toni shared little known facts about their love story.

In the first track, she pointed out that there are people who think The One is someone you can talk for hours.

For Toni, she believes, “You’ve found The One when you can sit and not talk for hours and be comfortable with silence.”

She said that it was through Direk Paul that she found the stillness of her heart--and amidst the silence they could both understand each other. This feeling was captured by Allison Krauss’ “When You Say Nothing At All.”

Toni then used the song “You And Me” by Lifehouse to describe how she used to be conscious about other people's perceptions about her relationship with Direk Paul.

But then, she realized that at the end of the day, their relationship will only be about the two of them, not about the people surrounding them.

For her third track, she gave a rendition of Michelle Wright’s “Your Love (The Greatest Gift of All),” whic refers the love she received from her parents, sister Alex and friends.

But then, just like any other girl, her heart longed to have a signifcant other. She recalled asking God how does it feel to love someone.

The actress-TV host thought that God did not answer her but she realized that she was just too busy to hear Him. Paul was actually God’s answer, and that her then-boyfriend loved her the way her parents would want her to be loved.

In her fourth track, she explained that she knew what Paul had to go through just for her, and it wasn’t an easy path.

Toni associated this life event with the song “Baby, Now That I Found You,” which was originally performed by The Foundations.

The fifth track of the song was Toni’s rendition of Jason Mraz’s “I Won’t Give Up.” She related the song to the bible verse 1 Corinthians 13:4-8 that indicated love is patient, love is kind, and that it never gives up.

If there's one person who could symbolize patience, it could be Direk Paul since it took them 8 years before they finally tied the knot.

Toni recalled how she felt during her wedding. She narrated how her eyes went on auto-pilot and focused on her groom in the middle of the aisle.

“He was just there… waiting for me. And when our eyes locked, no one else mattered. It was just him, me, and our forever.”

Toni related this milestone in her life to the song “Falling Slowly” by Glen Hansard.

She became nostalgic as she recalled the beginning of their romance.

“What I thought would just be another song, another music video…another director would turn out to be the song that would be the love theme of my life.”

She was talking about the shooting of her music video “Catch Me, I’m Falling,” which Paul directed.

The last track of her new album is a re-arranged version of her 2007 hit song.

This time, Toni sang it more dramatically, complete with the accompaniment of strings and piano.

The album Toni Gonzaga Soriano: My Love Story serves as the follow-up for 2014's Celestine.