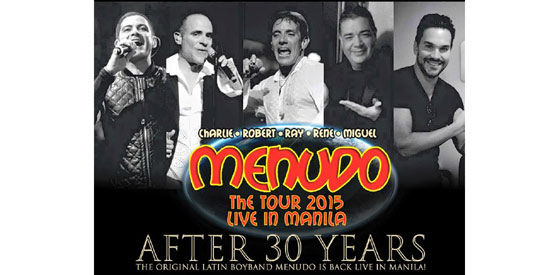 Menudo, one of the hottest boy groups from the 1980s, will perform at the Smart Araneta Coliseum on December 15, 2015.

Filipinos will get to spend an evening filled with nostalgia when Menudo returns to the Philippines for their third concert. Get to see the Puerto Rican singers perform at the Smart Araneta Coliseum on December 15, 2015.

In 1977, the Latin nation was introduced to the largest boy band the whole continent would ever witness: MENUDO. Until today, the Latin boy band’s record for sales, concert attendance and appearances remain untouched.

The Golden Era of the band was set during the 1980s when the Latin American band hit stardom not just within their region but throughout the U.S., Europe, Japan, and the Philippines.

Unlike most bands, Menudo had a long list of members because members had to leave after turning 16 years old. With this tradition, and a total number of 37 members, their presence was stretched into 4 decades of Menudomania.

Legions of fans from around the world flocked here and there in hopes of a Menudo sighting. In Sao Paulo, Brazil, the band once held a concert with more than 200,000 people in attendance. Fans ran across the street chasing the band’s entourage. In Mexico, the group broke the record for number of attendance in a concert when 500,000 screaming fans attended their concert.

On April 11, 1985, Menudo made their first visit to Manila producing several shows for the fans through their concerts and TV appearances. That same year, the group came back for more concerts just six months after their first visit.

One of their memorable acts was the opening number with Philippines’ very own Lea Salonga. The then-14-year-old girl performed “Separate Lives” with Robi Rosa.

Thirty years later, the boys of the Golden Era will be performing all together once more.

On December 15, 2015, they will reunite once more to relive the greatness of their music at the very same stage of the Araneta Coliseum. The band will be performing their classic hits like “Explosion,” “If You’re Not Here,” “Lady,” and “I’m Going Back to the Philippines.”

For tickets, log on to www.ticketnet.com.ph or call Tel. No. 911-5555 today. For concert info, visit www.lmmusicagency.com