Fifteen names in OPM songs—mythical or for real? 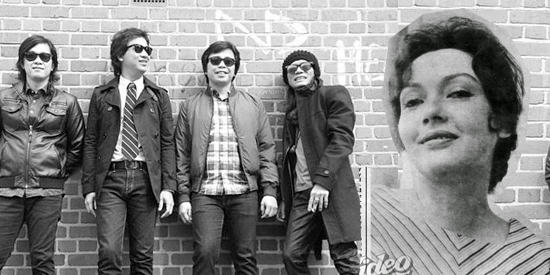 Did the Eraserheads mispronounce "too young" in their song “Toyang”?

Nope, it’s a quirky love song for Toyang, and she is a real person.

As foreign labels have name songs such as "Simply Jessie," "Vincent," and "Ben," so does our local recording.

The Original Pilipino Music is full of them.

Are the names based on real people? Are they special to the singer or composer?

PEP.ph (Philippine Entertainment Portal) tracks down the origins of the 15 names that are mentioned in popular Pinoy songs.

That is the first line of "Ang Huling El Bimbo," a tragic song about a man's unrequitted love for his childhood friend who died in an accident.

The song was written by Eraserheads' Ely Buendia and it became one of the band's biggest hit in 1995.

Paraluman was Sigrid Sophia Agatha von Giese, grandmom of former actress Rina Reyes. She was also an award-winning Filipina actress in the '40s and considered one of the country's most beautiful actresses of all time.

"Buloy" is a tragic first-perspective song of a man recalling his time together with his close friend who committed suicide.

He was one of the band's closest friends, and was still alive when the song was written. He also appeared on the music video of the song.

Buloy was driven to commit suicide by "several personal problems."

This one is a giveaway.

Kamikazee's "Narda" is about the fictional Filipina superhero Darna created by Mars Ravelo.

Darna is mentioned in the song four times, but the song is titled "Narda," Darna's alter-ego.

Hotdog's 1984 hit "Bongga Ka, Day" was inspired by the flashy fashionistas of the '80s.

Budji is Antonio "Budji" Layug, a sought-after hairstylist in the '70s and owner of the famous Budjiwara Salon. He is now into designing furniture.

Pitoy Moreno is the renowed Filipino fashion designer dubbed as "The Fashion Czar of Asia."

And Eloy comes from the famed Eloy's Ukay-Ukay, a popular thrift shop in Sta. Cruz Manila.

The band's bassist Buwi Menezes originally wrote the song, which was inspired by the famous online game Ragnarok.

Lead singer Chito Miranda tweaked the lyrics of the song, and titled it "Rai Muzen."

It was changed to "Mang Jose" on the suggestion of guitarist Darius Semana.

The Internet has no available information about the three women in Marco Sison's song "Si Aida, si Lorna o si Fe" from his album Best of Marco Sison (1991).

Louie wrote the song and according to his text, "Persons are not real. Just picked their names 'coz very common names. Just made up the story of the song."

It's the nickname of Ely's first wife Victoria Cayago, with whom he has a love child named Una Aurea.

"PA Roadie Fernandez," a song by Tanya Markova, is about an artista wannabe who ends up being an artista PA or personal assistant.

"Roadie Fernandez" isn't a real person but a pun based on the late actor Rudy Fernandez.

"Roadie" is how some band members call their assistants.

In an interview with Jay Taruc for GMA Network's I-Witness, former Hotdog members Dennis and Rene Garcia said that "Annie Batungbakal" was inspired by the beautiful Filipina domestic helpers they saw when they had their show in Hong Kong.

The brothers revealed, "We saw there were many Filipinas in the audience, and they were all beautiful!

"But they only came on Sundays. Turned out they were domestic helpers… that’s the inspiration for the song."

Some parts of the song also describe their youngest sister Gina.

Linda Blair was best known for her role as the possesed child Regan in the 1973 classic horror film The Exorcist.