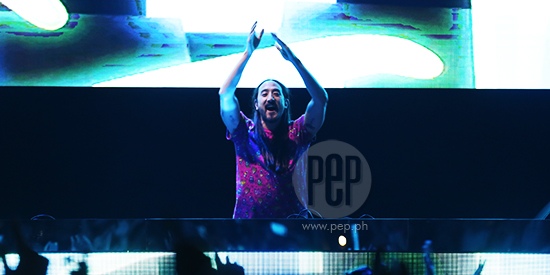 DJ Steve Aoki played some of his club favorites including "Turbulence," "I Love It When You Cry," and "No Beef."

Grammy-nominated record producer and American-Japanese musician Steve Aoki finally made his way back to the Philippines!

The renowned DJ partied with electronic dance music (EDM) fans until the break of dawn during the ultimate pool party in Manila.

At the concert-party, DJ Aoki said he makes sure to make a stop in the Philippines for his Asia tour every year.

This marks Steve Aoki's fifth visit to the country following his 2014 gig at EPIC Beach Front in Boracay Island for the Labor Day celebrations.

He is currently promoting his new album Neon Future II, the second installment of his trilogy album series.

Filipino EDM fans pumped up their fists as Steve played some of his club-favorite originals including "Turbulence," "I Love It When You Cry," and "No Beef."

Partygoers danced all night as he played some of his remixes including Mr. Probz's "Waves," Skrillex and Diplo's "Where Are U Now," Major Lazer & DJ Snake's "Lean On," Galantis' "Runaway (U &I)," Avicii's "Waiting For Love," and Calvin Harris' "How Deep Is Your Love."

Steve Aoki's concert-party wouldn't be complete without him giving booze showers and throwing cake at the faces of select fans.

The music producer hyped up the crowd and told them, "This song is called 'Cakeface'! Do you what happens when I play 'Cakeface'?"

Steve instructed those who want to be "caked" to climb up on a friend's shoulder. Ten fans were lucky to get their faces smashed with cake by Steve Aoki while his 2015 hit song “Cakeface” was playing.

The EDM musician asked partygoers to sit down before instructing them to jump up and dance as soon as they hear his beat drop.

Fireworks blasted in the sky for five minutes as Steve wrapped up the party with a remix of Coldplay's "Fix You" and the club favorite "Pursuit of Happiness" from the 2012 movie, Project X.

Everybody make some noise!! #SteveAokionSpotify