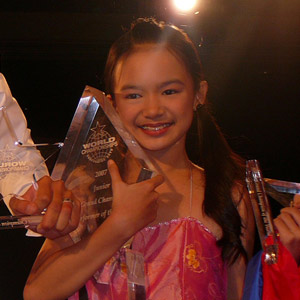 Aria Clemente brought honor to the Philippines when she was named Junior Grand Champion Performer of the World in last year's World Championships of Performing Arts. Who will follow in her footsteps when the 12th WCOPA takes place this July?

For the past few years, Filipinos have gained recognition in the annual competition cited as the official "World Talent Championships" for aspiring performers and entertainers. Will we continue our winning streak when the 12th Annual World Championships of Performing Arts (WCOPA) begins on July 20?


The opening ceremony will take place on July 20, 9:30 a.m. at the Universal City Walk with more than 40 countries to participate for the Parade of Nations. Hundreds of singers, dancers, jugglers and other performers from all over the world will compete in Hollywood, the entertainment capital of the world. This year's edition will take place from July 19 through July 27 at the Bonaventure Hotel in downtown, Los Angeles.

According to Griff O'Neil, competition president and a former executive of the Miss Universe Pageant, "More than 40 countries will participate and vie for the major titles plus $50,000 in scholarships awarded by the School for Film and Television in New York. This is the only truly Olympic-style talent competition ever created and we have been planting seeds for the past twelve years. Past talents and winners are aggressively making a name in the Hollywood industry and this time, we are once again ready to show off our spectrum of talents, both junior and adult divisions."

On July 20, popular TV host and three-time Emmy winner Bob Eubanks will once again emcee the opening ceremony to be held at the famed Universal CityWalk (now held for the second time). The big event, which will be covered by local and international press will have its traditional Parade of Nations to be participated by talent competitors coming from more than 40 countries plus special celebrity guests and past winners of WCOPA.


In last year's edition, Aria Clemente, ABS-CBN's Little Big Superstar finalist, was named as the Overall Grand Champion of the World (Junior Division). She sang an abridged version of "Don't Rain On My Parade" from the musical Funny Girl, allowing her to bag the Grand Champion Junior Vocalist of the World award as well.

Reymond Sajor, ABC-5's Philippine Idol Season 1 finalist, bagged the Grand Champion Senior Vocalist of the World award for his interpretation of the one-minute-long "Anthem" from the musical Chess.

The WCOPA has six categories of competitions and over a hundred judges from the entertainment industry will be involved before the main prizes, "Junior and Senior Grand Champion Performers of the World," are announced at the Finals. Included in the competitions are dance, vocal, modeling, acting, instrumental and variety arts. Each "act" is allowed 60 seconds to showcase their skills in the final competition.


The finals will be staged at the Grand Ballroom at the Westin Bonaventure Hotel on Friday evening, July 25.