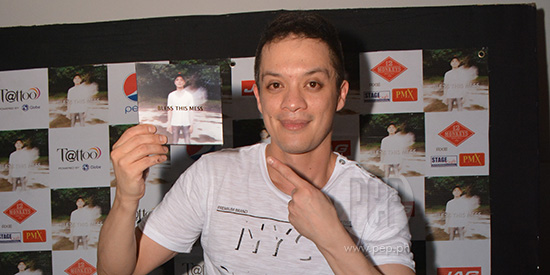 Bamboo on why he released an 8-minute long comeback music video for the first two songs in his album “Nothing Like You” and “Firepower": “Hindi ko sila puwedeng paghiwalayin, that’s why I said I’m gonna keep them together. Pareho silang song 1.” His Bless This Mess album will be available starting October 30, 2015.

The singer/songwriter treated his fans to performances of his new songs at the launch of his album on Monday night, October 26, at 12 Monkeys Music Hall and Pub in Makati City.

His album will officially hit record bars on October 30. Digital downloads and music streaming for some of his new songs are now available online.

For this album, the former front man of Rivermaya said that he went back to his roots.

Bamboo told the press, “I just basically went back, I went back. There are some '90s influences on this album. I mean, that was sort of the time I remember so I just drew from that.”

The singer further noted, “It’s a mix of all my influences as well—a lot of gospel, blues, rock, of course pop, soul and punk which I love. If I had a say what my rock root is, it’s really punk.

“That’s what I like so, I love the chance of being able to do that again.”

BLESS THIS MESS. Asked why his album was titled Bless This Mess, Bamboo said that there is no anecdotal meaning behind it. The OPM rock star further explained he wanted his listeners to relate to his album.

“I wanted it to be as poetic as possible and I wanted it to mean as much as it can when you read it and you listen to it, when you see it even in the photo.

“It could speak about the process of what I went through.

“It could be myself. It could be anything and everything. People always relate to that.

“People are sending me photos of like memes of Bless This Mess and they show the traffic in EDSA, stuff like that.

“You know, that’s the idea, people are getting it. That’s we’re trying to push for.”

Bamboo also referred to his sophomore album as a “selfie album.” He explained, “Every shot, every single thing, every detail, I just sort of got into that. I just wanted to make it something really personal as well on all levels.”

Bamboo explained, “Initially, ‘Firepower’ was supposed to be the first song. That was the first song written in the album, it was written during No Water, No Moon.

“Pero of course, hindi siya bagay at that time because No Water, No Moon is like orchestras, something very colorful. So, it just didn’t fit the mold at that time.”

“That was song number 1, and as I progressed and did the album, wrote more songs, I wrote ‘Nothing Like You’ and I though this is the perfect start for the album.”

FOUR YEARS. At one point of the press conference, Bamboo was asked about his almost four-year hiatus in the music industry.

The 37-year-old singer said, “These four years gave me the time to sort of like shift gears again—find myself again, as an artist, as a singer again.”

Bamboo added, “I was really patient because I really want it to be special, as well. I said something that’s cohesive, ang gusto ko isang album. That was what I wanted.

“I didn’t want singles, I didn’t want to release like an EP. I wanted a full thing, a full story. I wanted to go in the studio and enjoy it, as well. To me, that’s my favorite time—going to the studio.”

“I don’t want people like quietly sipping wine through it now. I mean, last album that’s what I did. Listening to it and sipping on wine and brings you somewhere else.

Bamboo said that he will have lesser TV appearances to focus on his new album.

“Maybe a little, maybe I’ll lessen it to a degree. At this point, I sort of want to figure out what works now.

“I just want to do that again like give it time to that.”