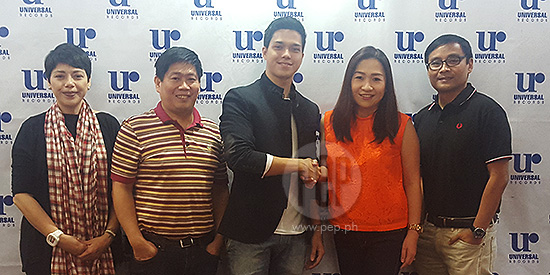 It took him a long time but GMA-7 actor Elmo Magalona has finally recorded his own music.

Universal Records executives Kathleen Dy-Go and Peter Chan along with music producer Ito Rapadas and Elmo’s mom and manager Pia Magalona were present at the contract signing held at the Universal Tower in Quezon City.

The recording company’s Managing Director Kathleen Dy-Go said they will be closely working with Elmo for his debut album.

“Our OPM producers, si Ito Rapadas, will be working closely with him and siguro with some other producers that can actually co-write songs with him.

“And I believe he also plans to merge with his older brother, si Frank Magalona.”

Elmo is now in the pre-production process of his debut album and the lady boss of Universal Records hopes to release his digital single by the end of the year.

Kathleen told PEP.ph (Philippine Entertainment Portal), “First of course, we will look for the write composers and also give him time to write songs.

“And then, we’ll pick from there and siguro this year, we’ll start recording na rin.

“Hopefully to have on single by the end of the year. That’s the immediate plan talaga for now.

She added, “Digital muna tayo then we can come up with an album early next year.”

Elmo confirmed that he will be writing some of his songs but he did not disclose how many tracks he will write for his debut album.

Being dubbed as the “Heir of Philippine Rap,” some fans of Elmo are wondering if he would really take on his father’s legacy by creating rap music.

The 21-year-old performer said that although he wants to uphold the musical legacy of his father, he would also like to leave his own mark on the music industry.

“I think yung sa album ko is gonna be more of a mix, para siyang rap pero with my style.

How does he write his songs?

Elmo futher explained that while he draws inspiration from his own experiences for some of his songs, he also wrote some songs based on his observations.