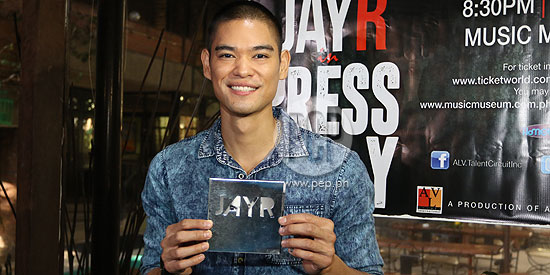 Jay-R is thankful for Your Face Sounds Familiar for tapping his hidden talent. The King of R&B will hold his fourth major concert on November 6 and 7 at the Music Museum.

King of R&B Jay-R is all set for his back to back Press Play concert on November 6 and 7 at the Music Musem.

It has been years since Jay-R last staged a concert and he said that he is both thrilled and nervous at the same time. It took him a while because he made sure that he is a hundred percent ready to perform on stage.

“This would be my fourth major concert...the last time was years ago,” says Jay-R.

“That was Soul in Love and OPM Love Classics.

“Sa akin as an artist it’s not enough to do concerts of remake albums, that’s why I didn’t make any concerts at that time.

“You know the beginning of this year I released Elevated and you know the people started to get familiar with the songs, tapos Your Face [Sounds Familiar] happened, all of a sudden the album turned gold.

Performing during his concert will be some of the artists under his own music label Homeworkz.

Will Press Play be a night of pure R&B music or will Jay-R play songs with a different genre?

“But the thing with my songs sa Press Play, we’re gonna do different version of it, e. Pero it’s still gonna be my songs.

Will the numbers be the same on both shows?

Jay-R clarifies, “It’s gonna be the same show on both nights.”

Jay-R admits that his Your Face Sounds Familiar stint helped his career, especially in enticing people to listen to his music. He is thankful to ABS-CBN for including him on the show.

“I think itong Your Face Sounds Familiar has helped me a lot as an artist.