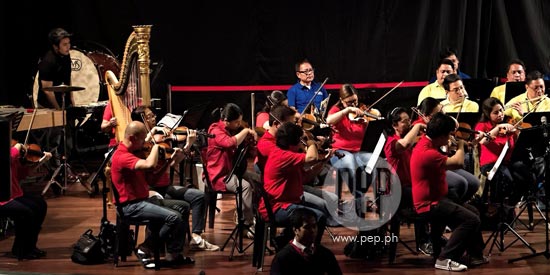 The Magic of John Williams will take place at The Theatre, Solaire on December 12, 2015. The concert of The ABS-CBN Philharmonic Orchestra will also feature Jose Mari Chan, Nikki Gil, and Morissette Amon of The Voice PH fame.

How would you like to relive the joy of watching classic films by listening to popular movie scores?

Filipinos will be able to do that when The ABS-CBN Philharmonic Orchestra celebrates the musical legacy of renowned American composer John Williams during the December 12 concert at The Theatre, Solaire.

“We’re gonna have Tito Jose Mari Chan and Nikki Gil sing the song ‘If We Were in Love’ from the film Yes, Giorgio. It’s the only movie I think that Luciano Pavarotti starred in. It was a national flop but the saving grace there were the song and the music of John Williams,” said long-time orchestra conductor Maestro Gerard Salonga about the upcoming concert.

Aside from Jose Mari Chan and Nikki, The Voice of the Philippines alumna Morissette Amon will also be performing "Can You Read my Mind" from Superman.

During the presscon held at the newly refurbished Dolphy Theater at the ABS-CBN compound, members of the press were treated to the orchestra's renditions of theme songs from NBC News, Jaws, Star Wars, Schindler’s List, and Harry Potter.

Salonga took this opportunity to explain why musical scoring with an orchestra is not yet being done in the Philippines.

“In the case of teleseryes, a television series in the U.S. that has to be scored with live orchestra is one episode a week. E, dito, everyday.

John Williams is an American composer whose career spanned six decades. He created music for popular Hollywood films such as Catch Me if You Can, A.I., Saving Private Ryan, Superman, among others.

His musical career started during the Golden Age of Hollywood cinema when he worked as a pianist and arranger for renowned composers such as Alfred Newman, Franz Waxman, Bernard Herrmann, and Henry Mancini. He won four Academy awards and served as Boston Pops Orchestra’s principal conductor for 13 years.

This is the third run of the performance and it will now include the additional pieces which were purchased for the show such as the themes from Home Alone and Hook.

The arrangements were exclusively acquired from the U.S. three years ago and only The ABSCBN Philharmonic Orchestra is allowed to use them for staging purposes in the Philippines.

“We’re not transcribing or rearranging anything. All the things that we’re performing have been purchased from his signature collection, so these are not transcriptions or versions. What we’re doing is from John Williams’ own hand,” explained Salonga.

The Magic of John Williams will take place at The Theatre, Solaire on December 12 at 8 o’clock in the evening. The estimated running time is 1 hour and 45 minutes.

Fan favorite movie scores that will be played include the adventurous bicycle chase in E.T., the thrilling sea hunt in Jaws, and the romantic flying scene in Superman. Other themes will be from Jurassic Park, Raiders of the Lost Ark, Close Encounters of the Third Kind, Harry Potter, and the 1984 Olympics Anthem.