Lifehouse to perform at the Big Dome on July 26 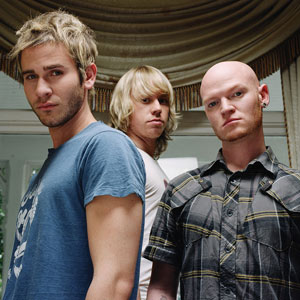 Lifehouse—composed of Jason Wade, Bryce Soderbergthe, and Rick Woolstenhulme Jr.—will perform on July 26 (Saturday) at the Araneta Coliseum. They will also be at the SM Mall of Asia Atrium on July 25 for an afternoon with their fans.

Reminisce with songs that not only captured top spots in charts all across the globe but the hearts of many as well. Sway along with "Hanging By A Moment," "You and Me," "Sick Cycle Carousel," "Whatever It Takes," "Spin," "Breathing," and "First Time," among others.


From their debut album No Name Face that contained the single "Hanging By a Moment" to their latest album Who We Are that contains the new single "Make Me Over," this band from Malibu, California, has reached heights farther than any of them ever imagined.

Lifehouse has been a resident band in popular TV shows that require mood enhancing musical scores. This includes the Superman TV series Smallville that effectively utilized the song "Everything." Another smash hit that is a TV show favorite is the song "Broken," which is part of their latest album titled Who We Are. This song has been used in episodes of Grey's Anatomy, One Tree Hill, Criminal Minds and The Hills.

Much of the appeal of the work of Lifehouse comes not only from the music but the genius collaboration of heartfelt words laid down by the group's lead vocals, Jason Wade. In a previous interview, this songwriter described his take on composing songs:

"A while back, I had a falling-out with someone I was really close to. I went through a hard time dealing with that, picking up the pieces. I'm not the kind of person who wants to sit down and have a long conversation about my feelings. That stuff tends to get worked out in the songs."

Jason gets his influence and inspiration from one of the biggest names in the music industry. He states in another previous interview, "I grew up not really listening to much music but my mom turned me on to the Beatles, and they changed my life. I became obsessed with them. How can you not be? They're the best of the best."

Delving deeper into the pop pantheon, he discovered the works of Todd Rundgren, Badfinger, the Raspberries and other masters of the form.

Lifehouse has indeed been on a wild journey filled with mostly success and little bumps on the road with the change in band members and the unavoidable comparisons having to exceed expectations of many. How does a breakthrough act like Lifehouse view this journey? They not only compare it to the success of the music they offer but their over-all view on life. As Jason would say, "It's hard to move on from a certain place in your life, but it's the struggle to do it that gets you to where you need to go."

Indeed, the greatest feat along this frequently rocky path is to stand, climb, fall and get back up again.

There is no better way to get a full glimpse of what Lifehouse has to offer than to get the collection of songs that speaks of utmost emotion and understanding.

ALBUM SIGNING. Get to see the Lifehouse members on July 25 (Friday, 5 pm) at the Main Mall Atrium of SM Mall of Asia. Get your copies at the venue of the Who We Are Limited Philippine Tour Edition Album. Fans will only get one but two CDs filled with Lifehouse hits. These feature live versions of Lifehouse hits such as "You and Me" and "Hanging By A Moment" plus new songs like "I Want You To Know," "Signs Of Life," and many others that will only be released in this unique collection of Lifehouse hits and fresh materials. Only limited copies will be sold in the venue so make sure to get there early.

Fans of Lifehouse also have the option of acquiring limited Meet and Greet passes available at participating NoCurfew Watch Stores. Call 556-0428 or 0917-856-7208 for details and inquiries.