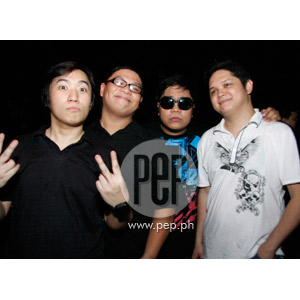 The quartet of Jugs Jugueta (guitar/vocals), Jazz Nicolas (drums/vocals), Kelvin Yu (bass/vocals) and Chino Singson (guitar) are certified journeymen. Their debut album, Little Monsters Under Your Bed, was released under Viva Records back in 2001. Despite the success of power pop singles "Antipara" and "Happy Birthday," the popularity of Pinoy rock music-commercially speaking-was already at its lowest point.

By that time, the Itchyworms and other bands signed under major labels suddenly found themselves homeless when their contracts were dropped. In 2005, the band re-emerged and released Noontime Show under Universal Records. A concept album, Noontime Show, witnessed the full potential of the Itchyworms as a solid power pop-rock unit. The album churned out the infectious "Akin Ka Na Lang," the ‘70s classic pop inspired "Beer" and the heart wrenching "Love Team."

Commercial success soon followed. Aside from the radio hits, the Itchyworms' ability to write catchy songs caught the fancy of multi-national companies thus enlisting the band's songs as promo vehicles as well as commissioning them to write jingles for ad campaigns.

MOVING ON. Commercial viability, as it turned out, was still not enough to please record executives. Soon, the band was also dropped by Universal Records, much to the surprise of fans and music industry insiders. A few months back, manager Kerwin Rosete announced to some media friends the good news: "They're now under Sony BMG [Music Entertainment]." He dropped another bomb: "They're now in the studio, recording."

"Kami ang nag-produce ng album na ‘to," boasted Jugs to PEP (Philippine Entertainment Portal) in an interview before the official launching. That decision perhaps has something to do with the fact that the band has been around for so long that they could well afford to man the studio board without feeling intimidated.

Listening to the record and actual performance, it is evident that the laid back quartet has not lost their mastery of weaving irresistible catchy tunes in the tradition of some of their idols like the Eraserheads, Matthew Sweet, Weezer, and The Beatles. "Nandun pa din ‘yon," beamed Jazz. "Except ‘yong iba," Jugs pitched in, "may mga art songs kami diyan na parang mantra, track 14 ‘yon, parang meditation music."