Alicia Keys performs for the 2nd time in Manila 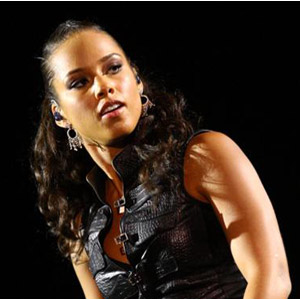 American R&B singer Alicia Keys wowed the Philippines with her vocal prowess and her dexterity on the piano during her one-night concert at the SMX Convention Center last August 5, 2008.

Wearing a black leather sleeveless top and tight-fitting pants, Alicia Keys burst into the stage to meet the eager fans who waited patiently for her at the SMX Convention Center last August 5, 2008.

Living up to her screen name of Keys (her last name is actually Augello-Cook; she was given the monicker because of her classical music background), Alicia wowed the crowd with her dexterity on the piano. Before sitting down on the piano, she sweetly asked, "I just wanna know, is it okay with you if I play my piano for you tonight?" The 15,000 audience members could not resist her charm.

This is the second time that the female R&B singer has been in Manila—her first appearance on Philippine soil was at the Araneta Coliseum back in 2004. Alicia referred to her previous visit several times during her performance, which started at around 9:45 p.m. and ended at 11:15 pm.


For the benefit of those located a long way off from the stage of the SMX, huge fifteen-feet high screens were set up at the center of the stage and on the both sides. Close-ups were done on Alicia's gorgeous face and her long fingers as they flew over the black-and-white ivory keys.

Alicia warmed up the audience by saying that "sometimes, you feel a certain way but you don't have the words to tell someone. You know, what I mean..."

She then kicked off her set with "Go Ahead" from her newest album As I Am. The 27-year old singer-songwriter performed a total of 19 songs that night, including two encores when the crowd chanted, "We want more! We want more!"

One of the most applauded numbers was her performance of "How Come You Don't Call Me." She even asked the members of the audience to put up their hands in the air and to answer back, "Call me!"

Alicia also performed a fast-paced remix of "Karma" with her on the piano. After showcasing her piano skills, Alicia told the crowd, "It's time we had a little fun!" The singer-songwriter then left the piano to groove to the beat of "My Boo."


The eleven-time Grammy award-winning singer introduced the crowd to Whitney and Amanda, her guitarist Jeff, bassist Steve, and Brian who exhibited cool tunes with his trumpet. Germaine Paul, one of the back-up singers, performed an impressive duet with Alicia for the cover of "Tender Love."


Some people thought that the show was over when she crooned her song "Fallin,'" but most members of the audience simply would not leave until they heard the singer perform her famous songs. The crowd got up on its feet to dance when Alicia returned to belt out the lyrics of "No One." Alicia encouraged the crowd to sing by saying "You sound so good!"

Some people filed out of the SMX Convention Center but most stayed to see if they could coax Alicia to do another song. Pretty soon, the American singer graced the stage again to do her second encore of "If I Ain't Got You."

You could hear the crowd singing along as she sang: "Some people want it all / But I don't want nothing at all / If it ain't you baby / If I ain't got you baby."

By this time, she said her final goodbye to the crowd. "Thank you all for your love, thank you for all of your support and your heart. Thank you for coming on this journey with me. We can't wait to come back to Manila! Thank you all so much for a beautiful night!

"We thank you so much for coming tonight. No rain, no wind, no snow, no sleet or anything could come between you and I. We can't wait to see you again! Thank you Manila and good night!"

Continue reading below ↓
This concert, organized by MTV Philippines and Music Management International, also had Luke Mejares and Duncan Ramos as opening acts.


Click HERE to view photos of Alicia Keys' As I Am concert in Manila.