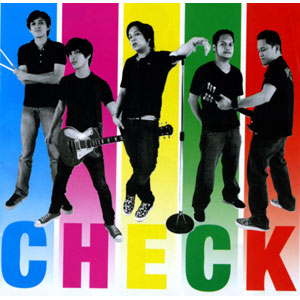 Back then, the band was still known as Check Experiment until they decided to shorten their name to make it more catchy and simple. The change of name coincides with the band's growing desire to write original songs instead of settling for cover tunes to liven their set.

"You can only go a certain distance doing covers and we matured and developed as musicians so the next logical step for us is to make our own songs," reasoned Pangan (who is not related to Jett Pangan of The Dawn).

Rodel seconded their frontman's explanation by saying, "We started this band because gusto lang naming tumugtog but along the way we enjoyed it tremendously and there's that itch to write original songs. Because individually and as a unit we experience things and what else can you do as musicians, creatively speaking?"

STRIKING A DEAL. Juggling their time between writing songs, performing and recording demos, the band was also simultaneously shopping for a record deal. It was December of last year when Sony BMG Music Entertainment expressed interest and signed the hard working unit for a record deal.

There's really no need for the band to adjust in a studio environment since they have been fastidiously cutting new materials inside the studio for years.

"Sobrang saya," said Jim animatedly, talking about working inside the studio with a proper studio album on mind.

Meeting and sharing a studio room with their heroes, however, were the only distractions during actual recording. Check's hard work resulted to the band's self-titled debut album consisting of ten original tracks.

Check's carrier single is "Ka-iisip"—a melodic and passionate ballad that talks about yearning brought by a lover's absence typical of those working in call centers.

The music video of "Ka-iisip" is now being played by local music channels.