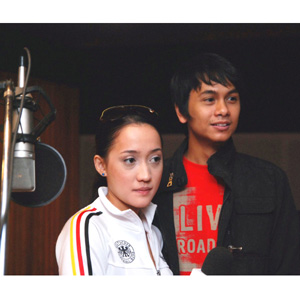 Julianne and Miguel Escueta provide an acoustic version of the song "This Is Me" in the Camp Rock original soundtrack (OST)distributed by MCA Music. This Disney Channel movie, starring the Jonas Brothers, will premiere on September 7 at 7:30 pm.


Join Joe, Nick and Kevin—popularly known as the Jonas Brothers—and Disney newcomer Demi Lovato as they rock out this cold season in the hottest camp to hit Disney Channel and music airwaves.

MCA Music Inc. together with Walt Disney Records is proud to present the original soundtrack of Camp Rock, the hottest TV movie that talks about how music brings out the best in everyone without trying hard to be someone else.


The plot thickens with a conflict that contains a lie, a love team, the usual mean girl and the true meaning of friendship and acceptance, all heightened with music that sets the right mood for the perfect scene. Also, be captivated with unforgettable production numbers featuring the biggest teen stars like The Jonas Brothers.

It's no surprise that this Disney movie is once again graced by a Filipina in the person of Anna Maria Perez de Tagle, the granddaughter of veteran operatic singer Sylvia La Torre. Anna Maria is one of the sweet but spicy minions of Tess Tyler and Roshan Fagan, the hip-hopping, breakdancing camper in the movie.

Though many have grown to love the Disney way of making songs suited for classic hopefuls and upcoming teen aspirants, Camp Rock serve to be more diverse this time around. The iridescent presence of the Jonas Brothers infuses a pop rock feel with "Play My Music" and brings the perfect follower for their previous love song, "When You Look Me In the Eyes" with "I Gotta Find You."

This is also a perfect preview for the new kind of sound that the Jonas Brothers possess as they are also set to release their new album, A Little Bit Longer, this season. New comer Demi Lovato on the other hand rocks it out with the movie-opener "Who Will I Be" and "Our Time Is Here." The Camp Rock OST also contains dance and hip-hop tracks like "Too Cool," "Start the Party," and "Hasta La Vista" that features Fil-Am Disney stars Anna Maria Perez de Tagle and Roshan Fagan.


Yet much anticipation should be credited to the carrier hit "This Is Me," a powerful duet with Joe Jonas and Demi Lovato. "This Is Me" has been picked by radio stations and has started acquiring seats in music charts across the Metro. It is just right then for this pop hit to have a local version that showcases two of MCA Music Inc.'s finest stars.

The Camp Rock OST also features the acoustic version of "This Is Me" sung by OPM's soul child Julianne and a bigger, stronger and edgier Miguel Escueta who has also recently released a repackaged version of his top-selling album titled I.Am.ME:Amplified.

Visit Odyssey, Astrovision, Music One and Fully Booked stores and grab a copy of either the single CD Camp Rock album or the CD and DVD edition of this soundtrack both inclusive of limited Camp Rock goodies. The Original Soundtrack of the hottest Disney TV movie, Camp Rock is brought to the Philippines by the newest licensee of Walt Disney Records and Hollywood Records, MCA Music Inc.