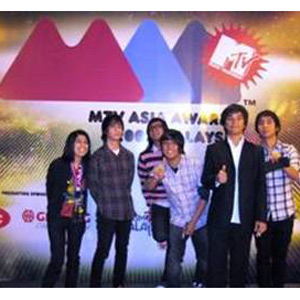 Soki Munar (leftmost), the manager of Chicosci, joins the band members in having a picture at the MTV Asia Awards held at Malaysia last August 1, 2008. In celebration of their "Favorite Artist" award, the band will hold a victory party at the Elbow Room, Metrowalk on August 29.


Chicosci recently won the "Favorite Artist" award for the Philippines in this year's MTV Asia Awards held at the Arena of Stars in Genting, Malaysia. The quintet bested other local acts such as Sponge Cola, Urbandub, and Sandwich through SMS and online voting. The five-man band is composed of Miggy Chavez, Carlos Calderon, Mong Alcaraz, Joel Salvador and Ariel Lumanlan.

It was said that votes for the band did not only come from the country but from other regions as well. "I was really surprised when I found out that we won because prior to the announcement, they took down the voting results on MTV Asia's website, so we really had no idea who was leading," recalls Miggy Chavez. When they found out they won through a text message from MTV, they couldn't believe it, thinking it was just a joke, until confirmed by their manager Soki Munar. The band is grateful for their solid fans and supporters that have been part of the "win," sharing that it was them after all who put in the effort to vote.

"What they want, they get," Mong Alcaraz says with a laugh. "They made the whole experience special. They really put in the effort to vote kasi we were up against big bands. E, sino naman kami?" Miggy was modest enough to add considering the band surprisingly has fans in Malaysia. During their visit, some locals would come up and ask for autographs and have their picture taken with the band.

Guitarist Mong Alcaraz described the entire experience as surreal-from meeting some fans (Filipinos and locals), walking the red carpet, eating curry backstage with Jared Leto-types, to having the Pussycat Dolls present their award onstage. The band jokingly admits that the real award they got were the free hugs from the sexy girls of the Pussycat Dolls. They also reveal that the highlights of their stay in Malaysia include going to the venue riding a limousine, staying in a hotel on the same floor with the international artists, walking the red carpet with all the fans screaming "Chicosci," getting their autographs and taking pictures, media people interviewing them here and there, and hanging out and talking with some of the international artists like Panic at the Disco, One Republic, among others.

Everyone who watched the MTV Asia Awards will not forget how lucky the Chicosci boys were to have accepted the award from world-renowned Pussycat Dolls. It was inevitable, the boys made quite an impression on everybody as they meet people asking about the encounter with the all-girl group.

At the risk of sounding a tad corny and being too boyish, drummer Joel Salvador says, "It was a totally unexpected win, having been against the top bands in the Philippines. When we started Chicosci, I never really imagined we would be able to go up on the biggest stage in Asia. It was the MTV Asia Awards! No one really sets goals that far. When a band starts out, dreams only end up to getting that first single played on the radio. What we have now and where we've gone is so much further than any of us have dreamed of. The Pussycat Dolls gave us free hugs, man! No Filipino has ever gone that far! Hahaha!"

Even vocalist Miggy Chavez felt that everything happened so fast: "One minute we were just sitting then we were being asked to come up onstage then we were already backstage chatting with Jared Leto!"

But even with the group's success, Chicosci is not one to be complacent. They are currently in the process of writing, planning and "demoing" their follow-up. When asked what's next for the band, Miggy concludes: "new album, new everything. We gotta keep it fresh."

Join Chicosci and the Vampire Social Club as they celebrate this much-awaited Victory Party on August 29, 2008 (Friday) 9 pm at the Elbow Room, Metrowalk. Catch them as they perform new songs from their upcoming album. The band promises to showcase never-before-seen performances for those who will attend the victory party.