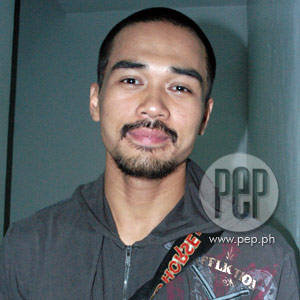 Vocalist Marc Abaya (in photo) and the other members of Kjwan are set to dish out their follow up to 2006's 2-Step Marv. Talking about the musical influences on Kjwan and their effect on the band's new set of songs, guitarist Jorel Corpuz said: "Meron kaming mga pinapakinggan na mga hip hop artists, e, tsaka mga two-step drum and bass mga nakukuha ko kay Jun, kay Kelly. Ginagawa na namin ngayon minsan, once in a while, nagku-cover kami ng Ever


A year after bagging the top plum in the band category of the IKON Asean tilt held at the Putrajaya Convention Center in Kuala Lumpur, Malaysia, Kjwan is now working overtime inside the recording studio to finish the band's follow-up to their 2006 album 2-Step Marv.

Guitarist Jorel Corpuz excitedly told PEP (Philippine Entertainment Portal) that the nearly two-year lull allowed the band to write more than a handful of new materials, giving the band the luxury of carefully choosing the songs they want to include in the album.

Although known as a unit that prefers rock, the quintet of Marc Abaya, J-Hoon Balbuena, Kelley Mangahas, Boogie Romero, and Jorel Corpus never denied their fascination for melodic pop tunes.

The band's previous singles like "Daliri" and "Pintura" best represents Kjwan's fondness for mixing melody with heavy metal riffs. Fans, however, were surprised when the band released the band's unabashed pop take, "One Look"—a straightforward confession of one's admiration for a loved one set in an almost sunny vibe.

REACHING OUT. True to their eclectic taste when it comes to music, Jorel shared that their varied interests have found its way into the band's current lineup of new materials.

And if "One Look" was any indication of Kjwan's direction, the amiable guitarist candidly said that they're now focused to come up with songs that would be commercially appealing without losing substance.

Speaking in behalf of his bandmates, Jorel frankly owed up that they're more comfortable writing songs in the English language—this despite the fact that some of the band's most memorable singles were written in the vernacular.

"May mga Tagalog kaming kanta pero it's one thing that we really need to learn kasi we really write by default in English," confessed Jorel, who, along with his bandmates, studied at the Ateneo de Manila University during their college years.

Aside from working on the still-untitled album, Kjwan is also planning to embark on a tour to promote the record. As for the itinerary, drummer J-Hoon excitedly mentioned places as far as Malaysia, Hong Kong and Macau, among other places.

Wearing a grin, J-Hoon proudly enthused, "They're waiting for us to come back."