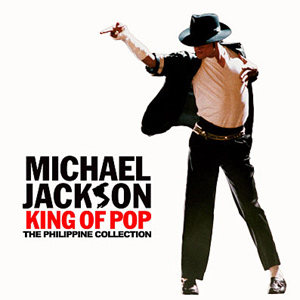 Sony BMG Music Entertainment pays homage to Michael Jackson on his 50th birthday by releasing a collection of the pop icon's biggest hits via the two-disc record, King of Pop.


Participating in the tribute were some of the label's top bands like 6cyclemind, Roots of Nature, Callalily and Itchyworms. Joining the special event was the vocal group Ryan Cayabyab Singers. Maestro Ryan Cayabyab was spotted among the crowd and was said to be eagerly cheering for the group he himself formed.


During the said event, all of the performers were asked to perform one Michael Jackson number and two original songs. The Itchyworms dished out their own version of Michael and Paul McCartney's classic, "The Girl is Mine"—with vocalist-guitarist Jugs Jugueta and drummer Jazz Nicolas trading vocal duties to replicate the duet between the two pop titans. The wacky quartet closed their set with "Freak Out Baby" and "Penge Naman Ako Niyan" derived from their latest record, Self Titled.


6cyclemind opened their set with the heart wrenching ballad, "She's Out of My Life." The group however opted to do a livelier number by launching immediately into "Billie Jean." For their originals, Ney and company did "Saludo" and "Magsasaya." Teen crowd darlings Callalily likewise showed their love to the controversial yet beloved icon through their rendition of "Beat It."


Just like in other countries, the content of the Philippine version of the special collection was finalized with the help of the fans. Just last month, MYX music channel asked the fans to vote for their top 10 all time favorite Michael Jackson songs which they want to be included on the album. Arriving at the results based on the votes given by fans, ten of the selected songs made it to the project.


King of Pop is comprised of Michael Jackson's well-loved hits including "Don't Stop ‘Till You Get Enough," "Rock With You," "The Girl Is Mine," "Thriller," "Beat It," "Billie Jean," "Bad," "I Just Can't Stop Loving You," "Heal the World," "Black or White," among countless others.


Distinguished by the Guinness World Records as the "Most Successful Entertainer of All Time," Michael Jackson is considered already as an icon in the field of music and in pop culture in general.


King Of Pop: The Philippine Edition is the first fan-driven album of its kind in the country. It is now available in record bars nationwide.