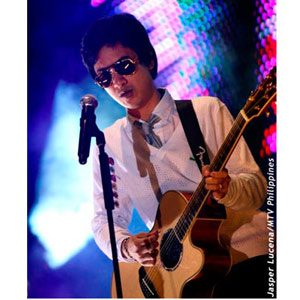 "Yes, I visited Ely [Buendia, ino photo] in the hospital yesterday. I hope he recovers soon. We have a show to finish." This statement from Raimund Marasigan's open letter, which was published in the Multiply account of his other band Pedicab, somehow gives hopes to Eraserheads fans who are still longing for a "second set" of the reunion concert.

So when the four-member band emerged on the set, fanatics started screaming out loud as Ely Buendia started to sing "Alapaap" while Buddy Zabala, Marcus Adoro, and Raimund Marasigan played their instruments. Six years after the band's break up, their fans finally saw them play together again on stage.

The audience sang along with the band when they performed "Ligaya," "Toyang," "Fruitcake," "Hey Jay," "Kama Supra," "Kaliwete," "Harana," and "Shake Yer Head." While the other reminisce their E-Heads days with the songs "Sembreak," "Kailan," "Huwag Kang Matakot," "Huwag Mo Nang Itanong," and "With A Smile."

However, after the legendary band performed "Lightyears," many noticed how Ely sat down on stage and looked exhausted from playing 15 songs straight without any spiels or break. After this, a voice announced that there would be a 20-minute break before the band resumes on their second set. (Click here to read related article)

THE SAD ANNOUNCEMENT. Twenty minutes after the announced break, Eraserheads has not yet come back on stage. Spectators started to wonder what caused the delay, but still they waited patiently.

Lally, then, went on with the message: "Thank you everyone for supporting the reunion concert of Eraserheads. We, however, regret to inform you that due to my brother's poor health because the emotional and physical stress that he's been experiencing, we apologize for cutting the concert short. My brother had to be rushed to the hospital for medical attention. Again, we apologize and thank you, all of you, for coming here tonight."

Raimund apologized as well, "We don't know what to say. We're in shock." Following this was the confirmation from the promoters about Ely's situation and their request for prayers and understanding from the audience.

The concertgoers, instead of shouting for more, openly accepted what happened and quietly left the venue after the announcement. (Click here to read related article)

"SECOND SET" IN SAGUIJO?" Days after the memorable concert, reports started to spread that the other three members headed to Saguijo Bar in Guijo Street in Makati, where played their supposed "second set" with the other local band members.

With this information, some of the people who came to the concert were questioning why the other Eraserheads members—Raimund, Buddy, and Marcus—played there instead of doing it at the Global City Open Field at The Fort.

Raimund, on the other hand, explained in an open letter republished in the Multiply account of his other band Pedicab, "We played in Saguijo because we wanted to, we needed to. Our hearts and souls dictated it. We could just go home and sleep. We did not talk about it. There was no invites, there was no plan. We did not get paid. We borrowed equipment."

On the later part, the Eraserheads drummer wrote, "If we finished the [E-Heads] show that night, you would STILL have found us in Guijo playing after."

Unlike what many have speculated, Raimund defended that their former band's frontman knew about the gig they did in Saguijo. "Yes, Ely knew about it. Buddy told him the next day."

ERASERHEADS REUNION PART 2? At the latter part of open letter, audience who felt "bitin" during the concert might find Raimund's line interesting. It read: "Yes, I visited Ely in the hospital yesterday. I hope he recovers soon. We have a show to finish."

MTV Philippines—the mother group of the reunion concert organizer named Radiohead—released a statement in a daily broadsheet today with regard to the return performance that people have been requesting.

Frances Lumen, CEO and President of MTV Philippines, first explained about the refund for those who bought tickets for the concert and explained that they have not yet received a single complaint about it.

Lumen said "In fact, when the Saturday show was cut short, the crowd readily joined a call for prayer, then dispersed quietly."

As for the part two, the MTV excutive said that the three also said that they were agreeable to a reunion part 2. However, this would depend on Ely's recovery.

The singer-composer is reportedly at the Philippine Heart Center where he underwent a third angioplasty last Monday, September 1.